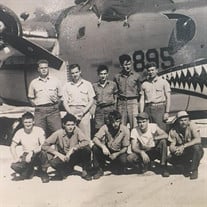 Mr. Albert Thomas, age 93 of Lecanto, Florida, died Sunday, July 8, 2018 in Lecanto, FL. He was the husband of the late F. Viola Thomas. He was born on December 19, 1924, son of the late Maud E. Thomas and Albert Hart Thomas of New Jersey. He enlisted in the US Navy at the age of 17 and served for three years in World War II. He was trained as a Combat Air Crewman (CAC), Aviation Radioman, Radar Operator and Aerial Gunner. He was assigned to Patrol Bombing Squadron VPB-111, his tours of duty included the South Pacific, the CBI Theater (China, Burma India), the Philippine Islands and many other areas. Squadron VPB-111 received the US Navy and Philippine unit citations. Members of the 10-man crew were also awarded the Distinguished Flying Cross and several Air Medals. After World War II he married F. Viola Bingham and was happily married for 60 years. During that time he graduated from Stevens Institute of Technology with an Engineering degree. Companies he worked for in the semiconductor inductor industry were Tung Soul Electric, RCA, Texas Instruments and Honeywell Optoelectronics. Mr. Thomas retired from Honeywell in 1985 and relocated from Plano, Texas to Beverly Hills, Florida. After Viola's death in 2008, he continued to attend the Beverly Hills Community Church where Viola was a member. In 2010 he relocated again to Brentwood Retirement Center in Lecanto, Florida. He was preceded in death by his parents, wife, F. Viola Thomas, sister, Alma Witter and sister-in-law, Elizabeth Zimmer. Surviving relatives include; Daniel Bingham of Raleigh, NC, William Bingham of Constantia, NY, Linda Reig of Springfield, NJ, Richard Pissott of Midland Park, NJ, Donald R. Pissott of Lafayette, NJ and John Raymond Witter of Fort Pierce, FL. Mr. Thomas's urn will be placed next to his wife's at Florida National Cemetery, Bushnell, FL. Services will be private. Online condolences may be sent to the family at www.HooperFuneralHome.com. Arrangements by the Inverness Chapel of Hooper Funeral Homes & Crematory.

Mr. Albert Thomas, age 93 of Lecanto, Florida, died Sunday, July 8, 2018 in Lecanto, FL. He was the husband of the late F. Viola Thomas. He was born on December 19, 1924, son of the late Maud E. Thomas and Albert Hart Thomas of New Jersey. He... View Obituary & Service Information

The family of Mr. Albert W. Thomas created this Life Tributes page to make it easy to share your memories.

Send flowers to the Thomas family.