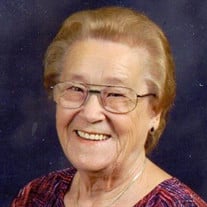 The Service of Remembrance for Mrs. Anna L. Frost, age 86, of Inverness, Florida, will be held on Wednesday, March 14, 2018 at 10:00 a. m. at the Inverness Chapel of Hooper Funeral Homes & Crematory with Pastor Frederick Ohsick officiating. The family will receive friends at the funeral home one hour prior to the service. The family requests expressions of sympathy take the form of memorial donations to the Hospice of Citrus and the Nature Coast, P. O Box 641270, Beverly Hill, FL 34464 or at their website, hospiceofcitrus.org.. Online condolences may be sent to the family at www.HooperFuneralHome.com. She was born February 27, 1932 in McComb City, MI, and was the daughter of the late Ralph and Mabel (White) Wells. She died March 9, 2018 in Lecanto, FL. She was a retired farmer. She moved to Inverness, Florida from Gaylord, MI in 2004. Mrs. Frost was a member of Good Shepherd Lutheran Church in Hernando, FL. Mrs. Frost enjoyed spending time with her grandchildren, especially baking with them. She and her late husband had enjoyed camping. She was an avid bowler and loved her church. In addition to her parents, Mrs. Frost was preceded in death by husband, George J. Frost, Jr., a brother, John Well and sisters, Dorothy Zieman, Betty Both, Edna Peters, Della Faye Jackson, Joan Ray, Marylou Snyder. Survivors include here daughter, Joann Frost of Inverness, FL; 2 sons, Thomas (Vickie) Frost of Inverness, FL and James (Diana) Frost of Eureka, MO; a brother, Louis Wells of Port Huron, MI; and sisters, Louise Perry of Port Huron, MI, Diane Lawrence of Richmond, MI, Sarah Treece of Romeo, MI, Cathy Kosal of Richmond, MI. She is also survived by grandchildren, Michelle, Elizabeth, Jacob, Nicholas, Bethany and Lydia and great grandchildren, Michael, Zachry, Ally, T.J. and Sammy. Arrangements are under the direction of the Inverness Chapel of Hooper Funeral Homes & Crematory.

The Service of Remembrance for Mrs. Anna L. Frost, age 86, of Inverness, Florida, will be held on Wednesday, March 14, 2018 at 10:00 a. m. at the Inverness Chapel of Hooper Funeral Homes & Crematory with Pastor Frederick Ohsick officiating.... View Obituary & Service Information

The family of Mrs. Anna Lee Frost created this Life Tributes page to make it easy to share your memories.

Send flowers to the Frost family.