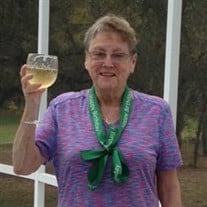 Mrs. Borghild (Boya) Larson, age 80 of Hernando, Florida, died Tuesday, May 29, 2018 in Hernando, FL. She was born March 1, 1938 in Hartford, CT, daughter of the late Carl and Dorothy (Sage) Berg. Boya grew up in West Hartford before moving to Newington to raise a family. She worked as a Nursing Home Administrator in Newington, CT before moving to Florida in 1992. Boya was a champion duck pin bowler, a card shark and a regular blood donor. She was also a great golfer and as a member of the Citrus Hills Golf and Country club, Boya had 3 holes in one! She was preceded in death by her husband William (Bill) and her sister Patricia Wilson. Survivors include 2 daughters, Doreen Schwerdtfeger and her husband Rich of Bonaire, Caribbean Netherlands, Linda Stein and her husband Jeff of Avon, CT, 4 grandchildren, Erin Hutton and her husband Tim, Rick Schwerdtfeger, Ariel Stein and Jake Stein, a great grandchild, Michael Hutton; a brother Dennis Berg and his wife Lynne, a brother-in-law Richard Larson and his wife Lorrie, and a sister-in-law Mary-Jane Traska and her husband Jim. Online condolences may be sent to the family at www.HooperFuneralHome.com. Arrangements by the Inverness Chapel of Hooper Funeral Homes & Crematory. Donations in the memory of Boya can be made to the American Lung Association or at the discretion of the giver.

The family of Mrs. Boya Larson created this Life Tributes page to make it easy to share your memories.

Send flowers to the Larson family.