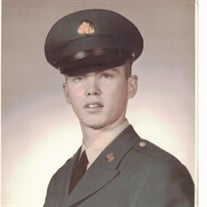 Charles (Chuck) R. O’Donnell, peacefully passed away surrounded by his family on January 21, 2021 after fighting a long battle with cancer. He is preceded in death by his parents Charles and Anna O’Donnell, his Brother Michael O’Donnell, his sister Patricia Jarosz, his sister Casey DeSouza and his love Rosie Bellinger. He is survived by his brothers, Peter O’Donnell, John O’Donnell, Steve O’Donnell, Joseph O’Donnell, sisters Mary Herring, Margaret Appel, and Ann Tyrpak. He is also survived by his daughter Rita Ann Bremer, Grandsons Levi and Gracen, and many sister and brother in laws, nieces and nephews. Chuck was a Vietnam War Vet and awarded the Silver Star, Air Service, Combat Medal for being wounded in hostile conditions, Presidential Citation, Good conduct, National Defense Service and other Medals for his service to his country and he was honorably discharged after his time in service. He was an avid fisherman and hunter, he liked nothing better than to throw his rod in and see what was good for catching. He enjoyed spending time with his friends and family, smoking a good cigar and chewing the fat. Chuck had a wonderful sense of humor and knew how to use it on anyone and everyone who was in close proximity. He is going to be greatly missed by his family and his many friends and the many who loved him. A funeral Mass will be held for Chuck on Wednesday February 10th, 2021 2:00 PM at St. Anthony’s Catholic Church 6090 SE 193rd Place Inglis, Fl 34449. A reception will be held and the family will receive friends immediately after the service at Lyon’s Club 22 59th St. Yankee Town, Fl 34498. Online condolences may be sent to the family at www.HooperFuneralHome.com.

Charles (Chuck) R. O&#8217;Donnell, peacefully passed away surrounded by his family on January 21, 2021 after fighting a long battle with cancer. He is preceded in death by his parents Charles and Anna O&#8217;Donnell, his Brother Michael O&#8217;Donnell,... View Obituary & Service Information

The family of Charles Robert O'Donnell created this Life Tributes page to make it easy to share your memories.

Send flowers to the O'Donnell family.