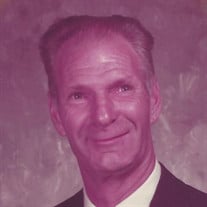 Charles Jones Parker (97) passed away December 2, 2021 at his daughter’s home in Jacksonville, Fl. He was born in Dials, Laurens County, South Carolina February 19,1924, but grew up in Cowpens, Cherokee County, South Carolina, He was a World War II Veteran having joined the navy in May, 1944. He went through basic training at Great Lakes Naval Training Center where he met Ruby Curley while on a three-day pass in Chicago. He completed training as an aviation machinist’s mate hydraulics (AMMH) in California and New York before being posted to the naval air station at Boca Chica in the Florida Keys. He and Ruby were married at the base chapel August 16, 1945. He achieved the rating of Seaman First Class and was separated from active service in June, 1946, He and his wife moved to Cowpens, where he worked in a cotton mill and owned and operated a feed store and hatchery. He was discharged from the naval reserves in June,1954 and moved his family to Inverness, Florida in 1956. He was a long-time resident of Floral City, Florida and worked as an electrician, plumber, and water plant treatment manager. He is survived by his daughter Carolyn Parker of Jacksonville, and grandson Gregg Campbell (Julia) of Yulee, Florida, daughter-in-law Sandra Parker, grandsons Jeremy (Susan), Joshua (Jennifer) and great granddaughter Harlow Skye Parker of Charleston, South Carolina, and several nieces and nephews in the US and Canada. He was preceded in death by his parents Oliver and Mary Parker, his wife of 64 years Ruby Curley Parker, his son Bryne Parker, and sisters Jean Harrison and Evelyn Hulsey. Visitation will be at Hooper Funeral Home in Inverness, Florida on Sunday, December 5th from 3 to 5 pm followed by a grave side service at Floral City Cemetery on Monday, December 6th at 10 am.

The family of Mr. Charles Jones Parker created this Life Tributes page to make it easy to share your memories.

Send flowers to the Parker family.