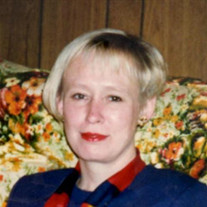 Chrisann Colleen Hoffman-Meyers, age 67, passed away at home under Hospice care on April 16, 2018 after a long battle with Multiple Sclerosis. Chrisann was born in Laramie, Wyoming on March 17, 1951, daughter of Ruth and Phillip Hoffman. Her formative years were spent in Oak Ridge, Tennessee where her father worked for the Atomic Energy Commission. The family later moved to Claymont, Delaware. Chrisann obtained her B.A and M.A. in sociology and psychology from the University of Delaware. She became a Licensed Professional Counselor of Mental Health. She worked for the State of Delaware assisting impoverished people obtain basic medical assistance and was a pre-sentence officer for Delaware Superior Court. She later worked as a counselor for Women Power, a federally funded program for training disadvantaged minority women in job skill development. She also worked for Delaware Technical and Community College in their job training program and served as a volunteer for an organization dedicated to helping victims of child sexual abuse. She completed her career in private practice as a family counselor and retired in 2010. She moved to Inverness, Florida with her husband in 2013. She was preceded in death by her parents. She is survived by her husband, David Charles Meyers of Inverness, Florida; step children, Elizabeth and Thomas Meyers of Newark, Delaware and their children, Uriel and Hayden of Newark, Delaware, respectively. Survivors also include her sisters, Victoria Conte of Claymont, Delaware; Virginia Bowdle, Greensboro, North Carolina and nieces, Allison Conte, Baltimore, Maryland and Leslie Conte, Claymont, Delaware. In addition, she is survived by her mother-in law, Helen Meyers, Elkton, Maryland; sister-in- law, Elizabeth Cawley, Earleville, Maryland; and brother-in- law, Thomas Meyers, Elkton, Maryland. She is also survived by her closest and long-term friends, Martha (Tejon) Still of Lugoff, South Carolina and Linda J. Harmon of Inverness, Florida. Despite her own hardships with multiple sclerosis, Chrisann devoted her life to helping people in need. Online condolences may be sent to the family at www.HooperFuneralHome.com. In lieu of flowers or memorial donations, Chrisann has requested donations be sent to Citrus Abuse Shelter Association (CASA), P.O. Box 205, Inverness, FL 34451. Arrangements by the Inverness Chapel of Hooper Funeral Homes & Crematory.

Chrisann Colleen Hoffman-Meyers, age 67, passed away at home under Hospice care on April 16, 2018 after a long battle with Multiple Sclerosis. Chrisann was born in Laramie, Wyoming on March 17, 1951, daughter of Ruth and Phillip Hoffman. Her... View Obituary & Service Information

The family of Mrs. Chrisann Hoffman-Meyers created this Life Tributes page to make it easy to share your memories.

Send flowers to the Hoffman-Meyers family.