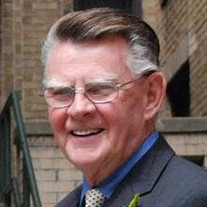 Mahoney Daniel J. Mahoney, of Hernando Florida, formerly of Cornwall NY and Oak Hill NY, entered into his new life on November 4, 2017. Dan was born on August 31, 1938 in New York City to Daniel and Nora Mahoney, who immigrated to New York from County Kerry, Ireland. In 1961, Dan married the love of his life, Marie Kennedy in New York City. They raised their young family in the city until moving to the Hudson Valley in 1973. Dan worked for Manhattan and Bronx Surface Transportation Operating Authority as a New York City bus driver until his retirement at age 52. Dan and Marie’s love of nature and open skies led them to build their dream home in the Catskill Mountains, the “Irish Alps”, where they lived full time until becoming “snow birds” in 2000. Dan loved life in Florida, where he could enjoy the outdoors year round. An avid landscape enthusiast, he was happiest with his hands in the dirt and sunshine on his shoulders. He could often be seen around his community, boating on the lake, painting his neighbors’ homes, and enjoying his time in the camera club. A kind, sweet, Christian man with a gentle spirit and an easy smile, Dan’s devotion to his wife and family was apparent to all who crossed his path. Nothing brought him more joy than the love of his wife of 56 years, his 5 children, and his 8 grandchildren, all of whom adored him. He is survived by his loving wife Marie, and their children…..Elizabeth Masse and her husband Raymond of Norfolk, MA, Dan Mahoney and his wife Andrea of Cornwall-on-Hudson NY, Chris Mahoney of Poughkeepsie NY, Anne Mahoney and her husband Eric Rodriguez of Newburgh NY, and Andrew Mahoney of Newburgh NY; his grandchildren Jen Bernard and her husband Ryan, Carol Anne Mahoney, Julia, Joseph and John Masse, Aidan and Elizabeth Mahoney, and Amelia Grace Rodriguez. He is also survived by many nieces and nephews. He is predeceased by his sisters, Maureen Callahan and Noreen Fitzgerald. Dan’s children would like to thank his many friends and those who have supported him and our family, especially Dana Fitzgerald, Lynn Cavaliero, Sidney Brooks, Shirlee Ambrosio, Kristina Dannels, and his many friends in Oak Hill NY and at Arbor Lakes in Hernando Florida. Visitation will be held at Inverness Chapel of Hooper Funeral Home, 501 W. Main St, Inverness FL 34450, on Saturday the 11th of November, 2017 from 12:30 - 2:30. A Prayer Service will be held at 2:00 PM at the Chapel. A Celebration of Dan’s Life shall take place at The Clubhouse at Arbor Lakes, East Arbor Lakes Drive Hernando, Fl., Saturday the 11th of November, 2017 beginning at 3:30pm. We plan on staying well into the evening, so come anytime. All are welcome! In lieu of flowers, donations in Dan’s memory can be made to Hospice of Citrus and the Nature Coast in Lecanto Florida. Online condolences may be sent to the family at www.HooperFuneralHome.com. Arrangements are under the direction of the Inverness Chapel of Hooper Funeral Homes & Crematory.

The family of Mr. Daniel J. Mahoney created this Life Tributes page to make it easy to share your memories.

Send flowers to the Mahoney family.