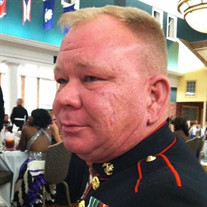 Danny T. McGinness, age 46, of Beverly Hills, FL passed away on March 3, 2019 at his residence. Danny was born in Brockton, MA, on August 29, 1972 . He was the son of Kenny Ray and Stacia (Kirkiewice) Chadwick. Danny was a 1991 graduate of Crystal River High School and enlisted in the United States Marine Corps. Danny served 21 years in the Marine Corps and attained the rank of Gunnery Sergeant. While in the military he served in both Iraqi Freedom and Enduring Freedom. During his service in the USMC he always took care of his Marines. He took the time to teach and answer question and challenge others to do better. He was known as a mentor and friend. He impacted many people by just saying Good Morning or holding the door at a store for a stranger. He loved his family, coffee, grilling and football (Go Patriots). Danny is preceded in death by his parents and two cousins Scott Roy & Deborah Sue. He is survived by his loving wife of 25 years, Vanessa Jones of Beverly Hills, 2 sons: Dorian Chadwick McGinness of Beverly Hills and Tristan Chadwick McGinness of Homosassa, FL., Brother Cody & wife Alicia Chadwick of San Diego, CA, Sister Trisha Chadwick of San Diego, CA, two Nephews Devon & James, his Aunt Sue, Uncle Rennie, Cousins Ashley and Dennis, Mother-in-law Linda and her mother Lois, plus the many members of his extended family by Marriage, long time friends and his Brothers and Sisters from the Marine Corps. Semper Fi until Valhalla. Military Services for Danny will be held 12:30 PM Friday, March 8, 2019 at the Florida National Cemetery, Bushnell, FL. Online condolences may be made to the family at www.hooperfuneralhome.com . In lieu of flowers the family requests Unit Patches, Coins or Donations be made to the Navy Marine Corps Relief Society in Danny’s name. Arrangements are under the direction of the Beverly Hills Chapel of Hooper Funeral Homes & Crematory.

The family of Mr. Danny T. McGinness created this Life Tributes page to make it easy to share your memories.

Send flowers to the McGinness family.