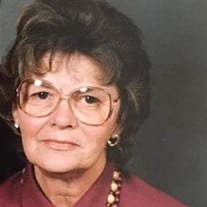 Doris Jeanne Wolfe Rooks, 86, passed away on May 11, 2019. She was in the loving care of “Janet’s Heavenly Home” in Tunnelton, WV at the time of her passing. Born on May 4, 1933, she grew up in Rowlesburg WV, the daughter of Senator Dallas and Virginia Wolfe. During her high school years, she was a cheerleader, Thespian, and was chosen as Princess to the Buckwheat Festival and as Queen Pomona to the Preston County Fair. After graduating from Rowlesburg High School, Doris went to West Virginia University in Morgantown where she met and married Robert N. Smith, Jr. In 1957, she and her husband, moved to Inverness, Florida where they both taught in the public schools. Doris taught Home Economics and Marriage & Family Living classes for over 30 years. Later in her career, she administered a state grant called “Family, School, Community Partnership” where she traveled the state of Florida networking and promoting this concept. She was an excellent teacher who was revered by students and faculty alike, voted “Teacher of the Year” multiple times during her 30-year career. She also taught school in Ft. Pierce, Florida for three years. In 1981, she married rancher, Almyr David Rooks, and lived with him on Panther Ridge Ranch in Floral City, Florida. After the death of Almyr, Doris moved back to Rowlesburg where she bought and renovated the old funeral home at Main and Buffalo St. She immediately became involved in helping to organize the Rowlesburg Revitalization Committee. Due to Doris’ efforts, Imre and Janet Szilagyi donated the old high school to the RRC, which now owns the Szilagyi Center, where several festivals are held during the year, including River City Festival on Memorial Day Weekend. Doris was instrumental in creating change in the hometown that she loved so much. Doris is survived by daughter, Jenny Morelli, son, Robert N. Smith, III, daughter, Nancy Jeanne and son-in-law, Terry Long, son, Kent Smith and daughter-in-law, Jill, and her children by marriage, Marjorie Rooks and David Rooks, 14 grandchildren and several great-grandchildren. She is also survived by brother, Dallas Wolfe, Jr. and wife, Jean, and sister, Kathleen Wolfe-Orescanin, and numerous nieces and nephews. She was preceded in death by her husband, Almyr Rooks, her parents, a brother, William Paul Wolfe, her first husband, Robert N Smith, Jr. and a great- granddaughter, Elania Canady. A Celebration of Life will be held at Hooper Funeral Home in Inverness on Saturday, June 1st at 11: am. For those who wish to make donations to the RRC, they can be sent to: Rowlesburg Revitalization Committee, Inc. (RRC), P.O. Box 135, Rowlesburg. WV 26425.

The family of Mrs. Doris Jeanne Rooks created this Life Tributes page to make it easy to share your memories.

Send flowers to the Rooks family.