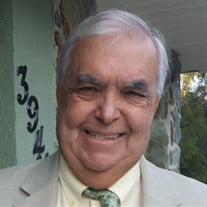 Hayes Edgar “Neil” Hayes passed into the arms of his Lord and Savior on Tuesday, June 13, 2017 in Inverness, FL. He was born August 25, 1938 in Niagara Falls, NY to the late Edgar T. Hayes and Nelle White. On August 19, 1961 he married the love of his life, Anne Whitmoyer in Niagara Falls, and they resided in Ransomville, NY and Hernando, FL during their marriage of 55 years. Neil is survived by his wife, Anne of Hernando, FL, daughter Cheryl of Hyattsville, MD and son Thomas of Youngstown, NY, as well as his granddaughter Ashley (Tim Cook) and grandson Kyle (Chelsea St. Laurent). He is also survived by an aunt, numerous brothers, sisters, nieces, nephews and cousins. He was predeceased by his parents and brother, Jim. Neil worked for more than 30 years for Occidental Chemical (formerly known as Hooker) starting as a tradesman and working up to a supervisor in the Energy from Waste Plant retiring in 1993. He served as Hooker Union President for 10 plus years and was instrumental in the improvement of workers’ safety during the Love Canal era. Neil won several awards with his 1940 Ford Coupe over the years and belonged to the Citrus County Cruisers. He was a huge outdoorsman who particularly loved hunting in the Almond, NY area, and fishing in Lake Kippewa, Quebec. He loved to travel, especially to Alaska. Neil loved to help people out and was willing to teach people about things they were interested in that he knew something about. Neil was a devout Christian who was very involved with the Faith Evangelical Presbyterian Church of Brooksville, FL, as well as an elder at the Colonial Village Presbyterian in Niagara Falls, NY. A memorial service will be held on Saturday, June 24, 2017 at the Faith Evangelical Presbyterian Church, 200 Mt. Fair Avenue, Brooksville, FL. Visitation will be at 10:00 a.m. and the memorial service at 11:00 a.m. Flowers are gratefully declined. Memorial donations can be made to Tampa Hope Lodge of Moffitt Cancer Center, 12810 USF Magnolia Drive, Tampa, FL 33612-9451 or Faith Evangelical Presbyterian Church, 200 Mt. Fair Avenue, Brooksville, FL 34601. Online condolences may be sent to the family at www.HooperFuneralHome.com. Arrangements are under the direction of the Beverly HIlls Chapel of Hooper Funeral Homes & Crematory

The family of Mr. Edgar Neil Hayes created this Life Tributes page to make it easy to share your memories.


Edgar “Neil” Hayes passed into the arms of his Lord and...

Send flowers to the Hayes family.