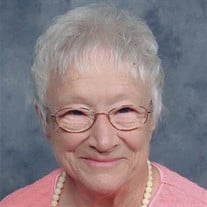 A Service of Remembrance for Mrs. Edith Marie (Welch) Willis, age 86, of Inverness, Florida, will be held Thursday, September 6, 2018 at 10:00AM at the Inverness Chapel of Hooper Funeral Homes. The family will receive friends one hour prior to the service at the funeral home. She was born March 15, 1932 in Manchester, ME, daughter of the late Norman and Frances (Cady) Welch. She died August 16, 2018 in Inverness, FL under the outstanding care of Hospice of Citrus and the Nature Coast, and staff of New Horizons Assisted Living. Edith and her husband Millard moved to Citrus County in 1971 and during the 1970’s and 1980’s Edith and Millard worked as mail carriers for the Lecanto and Beverly Hills Post Office’s. Edith was once a member and employee of the First United Methodist Church in Inverness. After Millard’s death, Edith moved to Weeks Mills, ME, living with and caring for her mother and sister. She traveled between Maine and Florida from 1985 through 2009, before moving permanently to Inverness, FL to be close to her daughter Joyce. While residing in Weeks Mills, ME, Mrs. Willis served as a deaconess for the Weeks Mills Baptist Church. Edith was a member of Victory Baptist Church in Inverness. Her hobbies included gardening and sewing. Mrs. Willis was preceded in death by her husband, Millard S. Willis, Jr., son, Warner D. (Danny) Willis, and four siblings, Leigh, Walter, Myrtie and Catherine. Survivors include a son, Millard Lewis (Debra) Willis of Claremore, OK, two daughters, Joyce (Timothy) Henderson of Lecanto, FL, and Juanelle Tracie (Earl) Eggers of Brenham, TX, two brothers, William Welch, Sr. of Mount Vernon, ME, and Earle Welch, Sr. of North Wayne, ME, two sisters, Alice Baxter of Weeks Mills, ME, and Norma Welch (Mike Luce) of Augusta, ME, five grandchildren, Richard Jennings, David Jennings, Bryan Willis, Christopher Willis, and Chad Willis, as well as numerous great-grandchildren, nieces and nephews. The family requests local expressions of sympathy take the form of memorial donations to Hospice of Citrus and the Nature Coast, P.O. Box 641270, Beverly Hills, FL 34464 or Citrus Abuse Shelter Association (CASA) at www.casafl.org. Online condolences may be sent to the family at www.HooperFuneralHome.com. Arrangements are under the direction of the Inverness Chapel of Hooper Funeral Homes & Crematory.

A Service of Remembrance for Mrs. Edith Marie (Welch) Willis, age 86, of Inverness, Florida, will be held Thursday, September 6, 2018 at 10:00AM at the Inverness Chapel of Hooper Funeral Homes. The family will receive friends one hour prior... View Obituary & Service Information

The family of Mrs. Edith M. Willis created this Life Tributes page to make it easy to share your memories.

A Service of Remembrance for Mrs. Edith Marie (Welch) Willis,...

Send flowers to the Willis family.