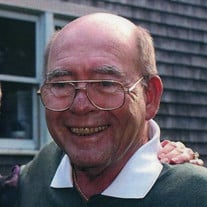 The Service of Remembrance for Mr. Edward J. Doyle Jr., age 75, of Hernando, Florida, will be held 11:00 AM, Saturday, May 13, 2017 at the Beverly Hills Chapel of Hooper Funeral Homes & Crematory. The family will receive friends from 10:00 AM until 11:00 AM, Saturday at the funeral home. He was born May 28, 1941 in Boston, MA, son of the late Edward and Rose (McPortland) Doyle. He died May 10, 2017 in Gainesville, FL. Mr. Doyle was a U.S. Navy veteran and Catholic by faith. He retired from Polaroid Camera Corp. as a Technical, Operations and Quality Manager. He was involved in the Polaroid Joint Venture "Svetozor" USSR where he was part of a three person team who began operations for Polaroid in the Soviet Union. His responsibilities included providing technical and operational leadership for starting three businesses including a Camera Assembly Plant in Moscow, a high volume Printed Circuit Assembly. Business in Obninsk, Russia, and a high volume Injection Molding Facility in Sillamae, Estonia. He was an avid golfer and a member of the Citrus Hills Golf and Country Club. He also enjoyed boating and fishing. Mr. Doyle volunteered at Citrus Memorial Hospital and Hospice of Citrus County and the Nature Coast. He also organized golf tournaments for local Veterans' Organizations. Besides his parents, Mr. Doyle was preceded in death by 2 brothers, Paul Doyle and Greg Doyle. Survivors include wife, Karen C. Doyle of Hernando, FL, son, E.J. Doyle, III and his wife Joyce of Portland, ME, daughter, Lisa Doyle-Bates and her husband Kenneth of Scituate, MA, stepdaughters Jennifer Adduci of Halifax, MA, and Karen Ferro and her husband James of Halifax, MA, 5 brothers, David Doyle, Robert Doyle, Jack Doyle, Phil Doyle, and Mike Doyle, 5 sisters, Mary Koketz, Christine Young, Margaret Hoffman, Dottie McCuen, and Diane Boggs, as well as 8 grandchildren and 2 great-grandchildren. The family requests expressions of sympathy take the form of memorial donations to Hospice of Citrus and the Nature Coast, P.O. Box 641270, Beverly Hills, FL 34464 or a local Veterans' Organization. Online condolences may be sent to the family at www.HooperFuneralHome.com. Arrangements are under the direction of the Beverly Hills Chapel of Hooper Funeral Homes & Crematory.

The Service of Remembrance for Mr. Edward J. Doyle Jr., age 75, of Hernando, Florida, will be held 11:00 AM, Saturday, May 13, 2017 at the Beverly Hills Chapel of Hooper Funeral Homes & Crematory. The family will receive friends from 10:00... View Obituary & Service Information

The family of Mr. Edward J. Doyle Jr. created this Life Tributes page to make it easy to share your memories.

Send flowers to the Doyle family.