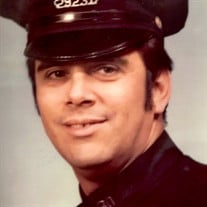 Mr. Einar George Calderon, age 82 of Inverness, Florida passed away at home, peacefully in his sleep on Saturday, May 5th, 2018. He was born on June 22nd, 1935 in New York, NY. To Eloise Alphonso and Emiliano Calderon. Einar proudly served in the United States Army in the 101st Airborne Screaming Eagles and as a highly decorated Police Officer with the New York City Police Department. He played semi pro baseball for the Warriors. He moved to Inverness, Florida from the Bronx, New York after his his retirement and worked part time for Bealls . Einar enjoyed playing Bingo and watching his favorite team, the New York Yankees but what he most enjoyed was dancing with his beloved wife Sally. They loved dancing together and dressing up every Halloween and going to the Spanish American club dances. Einar always put his family first, they were his world. He lovingly cared for his wife Sally, as she suffered with Alzheimer’s disease. He did it with love and grace and never complained and missed her terribly when she left this earth. Einar was a kind and soft spoken man. He was the epitome of what a role model is. Everyone who met him, loved him. All of his four children proudly followed in his footsteps, two became police officers and two made a career of the US Army. We will miss him terribly but take solace in knowing that he is dancing in heaven with our mother again. Einar is predeceased by his wife, Sally Rosemarie. He is survived by his four children and six grandchildren. Christopher, wife Jennifer of Brooksville, Florida. Craig of Inverness, Florida. Michael, wife Esmeralda of Ft. Huachuca, Arizona. Lizette, husband Eric of Oneonta, New York. Grandchildren Joseph, Megan, Brendan, Emma, Ryan and Michael. In lieu of flowers the family requests memorial donations be made to the Wounded Warrior Project at www.woundedwarriorproject.org.

Mr. Einar George Calderon, age 82 of Inverness, Florida passed away at home, peacefully in his sleep on Saturday, May 5th, 2018. He was born on June 22nd, 1935 in New York, NY. To Eloise Alphonso and Emiliano Calderon. Einar proudly served in... View Obituary & Service Information

The family of Mr. Einar George Calderon created this Life Tributes page to make it easy to share your memories.

Send flowers to the Calderon family.