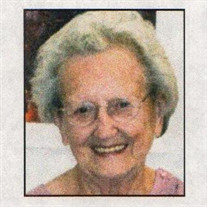 Elsie K. Haworth, award-winning Industrial Arts teacher, avid ballroom dancer, mother of four, and 9th great granddaughter of Plymouth Colony Elder William Brewster and Connecticut Colony Governor Thomas Welles, died on Tuesday, 25 July 2017 in hospice care in Altamonte Springs, Florida. She was 96. Born in Milford, Connecticut, she was raised with her eight brothers and sisters initially in Southbury, where she attended grammar school in the historic 1762 Bullet Hill two-room school house. The family moved when she was 13 to a 198 acre dairy farm in Woodbury, CT. As a young girl, Elsie enjoyed hopping into the back of a pick up truck with her siblings, or into the rumble seat of a Ford Roadster with friends, to go dancing to the swing bands of Sammy Kaye and Spike Jones. After graduating from Woodbury High School, she defied local expectations and left the bucolic family farm behind. She enrolled in Central Connecticut State Teachers College in New Britain, where she defied convention yet again, and began pursuing a degree in Industrial Arts. Elsie left college in her junior year to marry Ash Haworth, a handsome young U.S. Army reconnaissance photographer and former Prisoner of War just returned to the States after being liberated from a German Stalag. She and Ash moved to a 3rd floor apartment in Hartford, and four years later, with two young babies in tow, they signed a 1.5% GI mortgage on a small cape in the nascent suburban sprawl of East Hartford. To help pay down the mortgage, Elsie's in-laws moved in to help with child care while Elsie worked at Pratt & Whitney Aircraft, the "airplane factory" just a few miles from their new home. She first worked on the production line, machining the giant fan blades of jet turbines, but was later promoted to a teaching position in Pratt & Whitney's in-house "school", teaching newly-hired factory workers how to read plans, use a micrometer and operate the milling machines on the production line. After raising four children, she returned to university at age 50, finished her bachelor's degree, and was hired to teach Industrial Arts at O'Brien Middle School in East Hartford. She loved her job at O'Brien and often stayed after class to help her students if she saw they were struggling with something, even in subjects other than Industrial Arts. She successfully motivated several troubled, held-back students to improve their below-grade reading skills by using a Department of Motor Vehicles driver's manual as a reading text. In 1980 she was named "Outstanding Teacher of the Year" for the State of Connecticut by the Connecticut Industrial Arts Association. In 1981, at age 60, she graduated yet again from Central Connecticut State University, with a master's degree in Technology Education. After Ash and Elsie retired to Beverly Hills, Florida, Elsie took up ballroom dancing and quickly earned the nickname "Old Smoothie". She joined the Beverly Hills fishing club, sewed tailored ballroom gowns and sequined dance costumes, and volunteered hundreds and hundreds of hours as a teacher's aid at the Marine Science Station in Crystal River. At age 85, she traveled to Alaska with her eldest daughter, mushed a dog sled team across Denver Glacier, and out-fished everybody on the boat trolling for salmon out of Juneau. Widowed in 1993, she remained in Beverly Hills until 2005, when she moved to Orlando, across the street from her youngest son. Elsie had given up ballroom dancing, but with the assistance of her son and his family, she was still living in her own home and still rolling a bowling ball at age 95. Elsie marked and left behind a favorite prose poem that said in part, "When I leave you, don't weep for me.. I'll be off, dancing somewhere on the beach." She is survived by her four children, Carlene Haworth-Kaplowitt of Woodstock, CT; Gary Haworth and his wife Debra of Clearwater, FL; Thomas Haworth and his wife Gael of Orlando, FL; and Pamela Cyr and her husband James R. Gibson of Gibsonton, FL. She also leaves two brothers, Lee and Willard, and her sister Ruth in Woodbury, CT; and nine grandchildren and step-grandchildren, and ten great-grandchildren and step-great-grandchildren in Florida, South Carolina, and Alabama. She was predeceased by her husband, W. Ashton Haworth; by her brothers Arthur, Howard, Stanley and Charles, and her sister Irene; and by her son-in-law, Dr. Stephen J. Kaplowitt of Woodstock, CT. Her remains were interred beside those of her husband, in the Florida National Cemetery in Bushnell, FL. In lieu of flowers, the family requests that donations be made to the Alzheimer's Association in Elsie's name at www.alz.org

The family of Mrs. Elsie Haworth created this Life Tributes page to make it easy to share your memories.

Send flowers to the Haworth family.