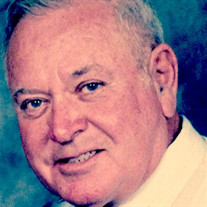 A Mass of Christian Burial for Mr. Eugene A. Hahr, age 88, of Beverly Hills, Florida, will be held 10:00 AM, Wednesday, March 28, 2018 at the Our Lady of Grace Catholic Church, Beverly Hills, Florida.  The family will receive friends from 5:30 PM until 7:30 PM, Tuesday at the Inverness Chapel of Hooper Funeral Homes.  He was born March 14, 1930 in Plainfield, NJ, son of the late Edward and Virginia (Fenton) Hahr. He died March 25, 2018 in Lecanto, FL.  Mr. Hahr was the owner and operator of a plumbing company. He moved to Inverness, Florida from Apopka, Florida in 1971. His hobbies included hunting, fishing, going to the beach and traveling. Mr. Hahr was a member of Our Lady of Grace Catholic Church. Mr.Hahr was preceded in death by his parents.  Survivors include his wife of 67 years, Rita Hahr of Beverly Hills, FL, 6 sons, Jeff Hahr(Cathy), Tom Hahr, Eric Hahr, Clay Hahr(Joan), Matt Hahr(Kelly), and Ron Hahr(Travis), 3 daughters, Chris Goodman(Dennis), Jennifer Van Cleef, and Kaatje Wells(Lee), 20 grandchildren, and 5 great grandchildren. Online condolences may be sent to the family at www.HooperFuneralHome.com.  Arrangements are under the direction of the Hooper Funeral Homes & Crematory.

The family of Mr. Eugene A. Hahr created this Life Tributes page to make it easy to share your memories.

Send flowers to the Hahr family.