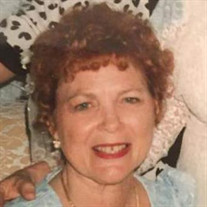 Mrs. Frances Pescow Roberts, age 81 of Miami, Florida, passed away Tuesday, October 31, 2017 in Lecanto, FL. She was born Frances Griner, September 20, 1936, daughter of the late Frances E. Jackson and Harold A. Griner, in Miami, FL. Frances was ordained in 1982 and assisted with counseling and other special services of Good Shepherd Lutheran Church. She was Coordinator of Via de Cristos in 1971. Frances was a volunteer for the Miami Autistic Society. She served as Prayer Coordinator on the Steering Committee of the Inter-Faith Prayer Breakfasts, and Director of Pass It On, Inc. Frances also participated in Friends' of Isreal's project called "Mercy Mission to Moscow". She had a heart for the world and served on mission trips in thirteen countries. Her selfless efforts did not go unnoticed as the Mayor of North Miami Beach proclaimed October 6, 1987 as Reverend Frances G. Pescow Day. She was preceded in death by her parents, her husbands: Jerry Pescow and Eugene Roberts, and her sister, Cherie Dowless. Frances, "Frankie", was loved by her children, grandchildren and great grandchildren as well as many nieces and nephews who she treated as her own children. She is also survived by her brother Buddy Griner of Flat Rock, NC. A Committal Service will take place 10:00 AM, Saturday, December 2, 2017 at Florida National Cemetery in Bushnell, FL. A Memorial Service is scheduled for 2:00 PM, January 6, 2018 at Sheridan Hills Baptist Church, Hollywood, FL where she worked and volunteered. Condolences may be sent to the family at [email protected] Arrangements by the Inverness Chapel of Hooper Funeral Homes & Crematory.

The family of Mrs. Frances P. Roberts created this Life Tributes page to make it easy to share your memories.

Send flowers to the Roberts family.