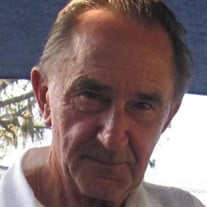 Francis DeMuro (aka “Frankie the Wrench”) of Crystal River (Ozello), Florida died peacefully Wednesday, April 24. The son of James and Estelle (Moskal) DeMuro, Fran was born in Philadelphia in 1942 and raised in Langhorne, PA along with his twin sisters, Janice and Joyce. After graduating from Neshaminy High School in 1960, Fran joined the U.S. Army in 1962 and was trained in heavy equipment repair, graduating at the top of his class at the Army Engineering Training School. Heavy equipment repair would become a life-long career and passion for Fran as he rose up quickly through the ranks at Giles and Ransom and Komatsu before leaving the large company environment to launch his own venture, DeMuro’s Heavy Equipment Repair in December of 1972. “DeMuro’s” began in Fran’s backyard but soon expanded to his “shop” on Route 309 in Souderton PA. The shop remained open and busy until his retirement in 2000. Fran was dad to three daughters, Diana, Carla and Gina. He devoted many hours to a shared family love – horses! Fran was both a skilled horseman in his own right, and a tireless horseshow dad, carting kids, ponies, horses, trucks and trailers to countless horseshows and other horse-related events. He also enjoyed his role as Grandpop Fran – exploring and explaining the outdoors, collecting fossils and, of course, ponies and dogs, goats and other “critters” he so loved. Fran was known to many for his quick wit (and sometimes temper!), wonderful story-telling abilities and sense of humor. Fran was a man of his word and a steadfast, loyal friend. This often came in handy to others because he also possessed incredible innate mechanical abilities. Many will attest to the fact that if Fran couldn’t fix it, it simply wasn’t broken! He could be counted on to coax the most stubborn engines to run and could often diagnose a problem simply by listening – his eyes would light up and it would be clear he’d identified the problem. One cannot remember Fran without thinking about music. His natural musical ability was a true gift and one that brought him great joy. All those close to him can quickly picture him, guitar in hand, picking out a song he’d just heard or writing his own – his tastes ranged from old country and blue grass to classical acoustic and electric guitar. He could also play the trumpet, the organ, the accordion, the banjo, the ukulele, a mean harmonica as well as the spoons! Anything in Fran’s hands could become a musical instrument. The sound of his instrument de jour accompanied by his melodic singing voice will be dearly missed. Fran was the kind of friend we aspire to be and for that, he was richly rewarded by many life-long friendships both in Pennsylvania as well as on “the rock” in Ozello. For that reason, it is with grateful hearts we wish to acknowledge his special friends, “Team DeMuro”, for their unfailing love and support. In addition, Fran is survived by his daughters Diana DeMuro, Carla (Gary) Romano, Gina (Randy) Zeafla and their mother, Joan (William) Konyk and three grandchildren: Carla Giorno, Joe Schaffroth and Kerra Mercon; his sisters Janice (Sam) Spadaccino, and Joyce (Lou) DeMuro and their families; and his longtime companion, Pamela Watkins. Planning for a memorial service is underway. In lieu of flowers, donations may be made to the Kings Bay Restoration Project (savecrystalriver.com).

Francis DeMuro (aka &#8220;Frankie the Wrench&#8221;) of Crystal River (Ozello), Florida died peacefully Wednesday, April 24. The son of James and Estelle (Moskal) DeMuro, Fran was born in Philadelphia in 1942 and raised in Langhorne, PA along... View Obituary & Service Information

The family of Mr. Francis J DeMuro created this Life Tributes page to make it easy to share your memories.

Francis DeMuro (aka “Frankie the Wrench”) of Crystal River (Ozello),...

Send flowers to the DeMuro family.