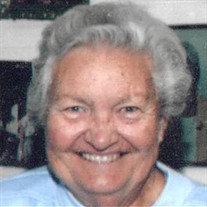 The Service of Remembrance for Mrs. Frances Fay White , age 89, of Orange Park, Florida, will be held 12:00 PM, Tuesday, June 30, 2020 at the Inverness Chapel of Hooper Funeral Homes with Pastor Stan L. Stewart officiating. Interment will follow at Red Level Cemetery, Red Level, Florida. The family will receive friends from 11:00 AM until 12:00 PM, Tuesday at the Chapel. Online condolences may be sent to the family at www.HooperFuneralHome.com. Fay was born April 26, 1931 in Red Level, FL, daughter of Frank and Bonnie (Priest) White and died June 21, 2020 in Orange Park, FL. In 1944 she moved to Inverness and was a graduate of Citrus High School in 1949. Fay earned her nursing degree from St. Lakes Teaching Hospital Nursing School in 1952. and went on to work at St. Luke's in Jacksonville as a Surgical Registered Nurse until 1962. In 1965 Fay returned to live in Inverness and began work at Citrus Memorial Hospital as a Surgical Registered Nurse and rose to be the Operation Room Supervisor until her retirement in 1993. After retiring, Fay moved to Orange Park, FL. She was a member of a pioneer Citrus County family and the Red Level First Baptist Church. Fay loved traveling in her motor home and was a big time Gator Booster going to all Gator Games and traveling all over the US. She was preceded in death by her parents, brother, Bob White, sister, Mae Glasco, and brother-in-law John Adams. Fay is survived by her son, Mark Christopher White, daughter-in-law Pauline Frances White, grandsons Mark and Travis White granddaughter Gabrille White great granddaughter Chole White, Uncle Wayne Priest, brother-in-law James Glasco many nieces and nephews and cousins. Fay is also survived by a large extended family throughout the country. Arrangements are under the direction of the Hooper Funeral Homes & Crematory.

The family of Mrs Francis Fay White created this Life Tributes page to make it easy to share your memories.

The Service of Remembrance for Mrs. Frances Fay White , age 89,...

Send flowers to the White family.