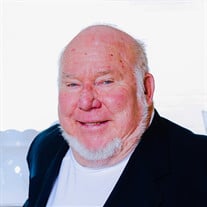 Mr. George Lawrence Black Jr., age 85 of Homosassa & Tampa, Florida, died peacefully Wednesday, January 17, 2018 in his sleep at Lecanto, FL. He was born August 8, 1932 in Redwater, TX, son of George and Vivian (Swayze) Black. George graduated from Texas A & M University with an Engineering degree. He was a Air Force veteran who served during the Korean Conflict. George was an entrepreneur and owned his own Engineering and Class A Contractor businesses in the Tampa Bay area. He was a real estate developer, developing shopping centers and a 500 unit RV park in Pasco County. He served on the Pasco County Building Board for over 20 years and started and belonged to numerous professional organizations. He was an avid Texas A&M Aggie Football Fan and was a member of the First United Methodist Church of Homosassa. Mr. Black was preceded in death by his parents. He is survived by his beloved wife Paula Ann Black of Homosassa, FL, daughter, Cindy (Richard) Walker of Orlando, FL, son, Scott (Debbie) Black of Sarasota, FL, daughter, Lisa Black of Tampa, FL, stepson, Marc Renner of Homosassa, FL, stepdaughter, Annette (Jimmy) Britton-Plate of St. Cloud, FL, 2 grandchildren: Chandler Black, Cory Black and step-granddaughter, Christa Britton-Snow. The family requests in lieu of flowers that memorial donations be made in George's honor to the First United Methodist Church of Homosassa 8831 West Bradshaw Street Homosassa, FL 34448. Online condolences may be sent to the family at www.HooperFuneralHome.com. No memorial service is planned at this time. Arrangements by the Homosassa Chapel of Hooper Funeral Homes & Crematory.

The family of Mr. George Black created this Life Tributes page to make it easy to share your memories.

Send flowers to the Black family.