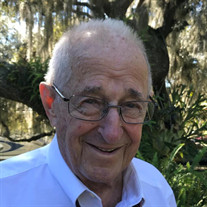 Not sure what to send?

Harold Jackson “Jack” Soule, age 90, of Inverness, died November 16, 2021 at his home surrounded by his loving family and graced by the amazing support of Hospice. Jack was born November 10, 1931 in Randolph, Vermont, the son of Horace Allen “Babe” Soule and Ada Merle (Allen) Soule. He graduated from Randolph High School in 1949. In 1950 Jack enlisted in the Air Force, serving for 20 years and retiring in 1971 as a Master Sergeant. After retiring from the military Jack returned to Vermont and worked at Waterbury Plastics and the Randolph National Bank until retiring in 1993. In 1999 Jack and his wife Anita moved to Inverness, FL from Barre, Vt. Anita stated that Jack felt privileged to serve his country and developed a deep love for flying and working on aircraft. He enjoyed traveling to places around the globe that he otherwise might not have if not for the AF. He earned his private pilot’s license at the Berlin Airport in Vermont, he was a natural. Jack enjoyed traveling with his friends and family on his motorcycle, camping and having new experiences. Jack and Anita went from tent camping to a fifth wheel over the years and traveled extensively to National and State parks across the US. Together they enjoyed volunteering many summers at Camp Plymouth State Park in Vermont, a park that was a former Boy Scout camp he had enjoyed as a young boy. Jack never refused a cribbage game or pinochle. His brothers were probably waiting for him in heaven to deal the cards. He enjoyed working around the yard and welcomed neighbors to stop by and visit. Jack loved cooking, trying new recipes, sharing meals at home with friends and family and he loved music and carried a song in heart. Early into Jack’s illness a beautiful quirky stray young calico cat adopted Jack and Anita, with a little help from an angel. “Cally”, with her unique personality and love of laps, became his constant companion, even traveling in the camper as their copilot. Jack is predeceased by his first wife Elaine D Chadwick Soule, his son”Ric” Randall Allen Schroeder-Soule, brothers: H Allen Soule, Robert W. Soule, and Ronald J. Soule and his grandson Nathan C. Kadel. He is survived by his wife Anita Vail Swan Soule of 25 years and their beautiful blended family. Stephen J. Soule and spouse Adrienne (Addie) Soule, Waterbury Center, VT, Sherry A. Soule, Beverly Hills, FL, David C. Soule, Mansfield, MA, Susan J. Soule , Walla Walla, WA, and Sheila M. Soule, So. Burlington, VT , Kristal Bailey, Williamstown, Vt, MIchelle Bailey, Hyde Park, Ma. and Jennifer Straight of Barre, Vt. Together they have 18 grandchildren and 8 great grandchildren and many nieces and nephews. He had some very special in-laws and “outlaws”. Jack made friends wherever he went , his smile, welcoming greetings and true interest in getting to know them. He had a heart large enough to love us all and we are thankful to have been a part of his life. Services and interment for Jack will be held June 17, 2022 at 1:00 pm in the Chapel at the Vermont Veterans Memorial Cemetery, Randolph, VT. Online condolences may be made to the family at www.hooperfuneralhome.com. In lieu of flowers, you may make a donation to the Vermont State Parks in his honor either online at Vermontparksforever.org or by mail at Vermont Parks Forever, PO Box 815. Montpelier,Vt 05601

The family of Mr. Harold Jackson "Jack" Soule created this Life Tributes page to make it easy to share your memories.