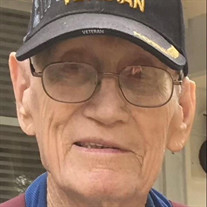 Mr. Harry H. Hibbetts, age 91 of Inverness, FL died March 29, 2021 in Lecanto, FL. He was born February 7, 1930 in Kilbourne, IL to Arthur and Eunice (Davenport) Hibbetts. In December of 1948 Harry enlisted in the Army and was a Light Weapons Infantry Leader in Co. B Cavalry Regiment of 1st Cavalry Division. In the early 1950’s Harry’s company was sent to Korea where they participated in various campaigns. In 1951 Harry was wounded in action and was awarded the Purple Heart. It was during this action that Harry received a citation and a write up in the newspaper. The article reads as follows “With the 1st Cav Div. in Korea - The Silver Star Medal has been awarded to SFC Harry H. Hibbetts, husband of Mrs. Della Hibbetts, of Keokuk, IA for gallantry in action in Korea. He received the decoration, third highest combat award, for his actions on July 11, 1951, near Kaidong, as a member of Company B, 8th Cavalry Regiment. His platoon was assigned a combat patrol mission to the contact the enemy, well-entrenched on high ground and concealed by dense vegetation. When the unit was pinned down Hibbetts exposed himself to the hostile fire to direct a 57-millimeter recoilless rifle section. After destroying the machine- gun he observed enemy troops moving to the right and left of the platoon to cut off its route of withdrawal. Hibbetts disregarding his personal safety charged the hostile element firing his rifle and throwing grenade which inflicted several casualties and forced its retreat. In this action he was seriously wounded but continued directing his men out of the ambush until he was evacuated. The citation concluded that Sergeant First Class Hibbetts gallantry reflects great credit on himself and the military service”. For his actions Harry was also awarded the Silver Star and the Korean Service Medal with bronze Service Stars. After his war service Harry owned and operated a Shell Service Station for over 25 years and eventually retired as a mechanic. In 1987 Harry moved to Inverness from St. Petersburg, FL. He was a 32nd degree Mason and a Shriner. Harry enjoyed tinkering with things, racing stock cars, watching NASCAR, yardwork and just being outside. His family says of Harry that he was always ready to help those in need. Harry was predeceased by his parents, his wife Della Mae Hibbetts, Son Donald Hibbetts and siblings. He is survived by 2 sons: Harry Michael Hibbetts of Floral City, FL and Gerald (Kelly) Hibbetts of Inverness, FL, daughter in law Robin Hibbetts, 4 grandchildren and 3 great grandchildren. Services for Mr. Hibbetts will be held 10:30am Thursday, April 21, 2021 at Florida National Cemetery, Bushnell, FL. Online condolences may be made to the family at www.hooperfuneralhome.com. Arrangements are under the direction of Hooper Funeral Homes & Crematory.

Mr. Harry H. Hibbetts, age 91 of Inverness, FL died March 29, 2021 in Lecanto, FL. He was born February 7, 1930 in Kilbourne, IL to Arthur and Eunice (Davenport) Hibbetts. In December of 1948 Harry enlisted in the Army and was a Light Weapons... View Obituary & Service Information

The family of Mr. Harry H. Hibbetts created this Life Tributes page to make it easy to share your memories.

Send flowers to the Hibbetts family.