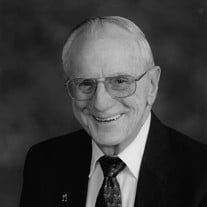 On January 24th 2019, beloved father and community friend, Harry Donald McCoy, age 88, answered the final boarding call and departed for his eternal home. With his passing, there is an emptiness no one can fill, but his cherished memories and love will help fill the void. Born in 1930 to parents Joseph and Cleo Martens, he grew up near the Maryland railroad yards of B&O where his love of trains and transportation was forever forged. After graduating high school, he joined the Salvation Army for training, and to dedicate his life to their ministry. Fate intervened and he was unable to fulfill his desire to become one of their soldiers. He remained, however, and worked in the mission area, where he met his true love and soul mate Mildred. They were soon married and remained devoted to each other for 58 years. He left Salvation Army to raise a family and found work with Southern Railways in the maintenance division. Unfortunately after several years, and due to bad economic times, he had to leave the railroad. He soon went to work at a growing company known as Eastern Airlines, where he worked for over 35 years until finally retiring in 1989. Sadly, fate again intervened, when his beloved wife was called home. Ever the dedicated Christian, he found comfort in his church. Not long after, in 2008, he followed his son and moved to Citrus County, finding a new home with First Baptist Church of Beverly Hills. There he dedicated his final years to the church and his extended family becoming a Deacon and ministering by song and music to many in the local area. His voice, that touched so many, is now forever silenced. He is survived by sons Michael McCoy and wife Rowena, Terrence McCoy and wife Theresa, and Sean McCoy and wife Judy. His grandchildren include Tonia, Tera-Lynn, and Joey, Dylan and Shawn as well as six great-grandchildren. He is preceded in passing by his parents Joseph and Cleo Martens, his adopted father Preston McCoy, his beloved wife Mildred McCoy, his son Timothy McCoy, and his brothers George Roberts McCoy and Joe Carroll Martens. A Memorial and Celebration of Life, officiated by Pastor Marple Lewis, will be held at First Baptist Church of Beverly Hills on Friday, February 1st at 11 AM. The family will receive visitors and friends starting at 10AM. The family requests expressions of sympathy take the form of memorial donations to Citrus County Sheriff’s Volunteer Fund at 4095 N Lecanto Rd Beverly Hills, FL 34465. Arrangements are under the direction of the Beverly Hills Chapel of Hooper Funeral Homes and Crematory. Online condolences may be sent to the family at www.HooperFuneralHome.com.

On January 24th 2019, beloved father and community friend, Harry Donald McCoy, age 88, answered the final boarding call and departed for his eternal home. With his passing, there is an emptiness no one can fill, but his cherished memories and... View Obituary & Service Information

The family of Mr. Harry Donald McCoy created this Life Tributes page to make it easy to share your memories.

Send flowers to the McCoy family.