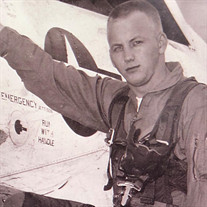 A Service of Remembrance for Harry Burnell Sampson, Sr. age 79, of Hernando, FL will be held 11:00 am Saturday, April 27, 2019 at the Inverness Chapel of Hooper Funeral Homes & Crematory. The family will receive friends from 10:00 am until 11:00 am at the chapel. Internment and military honors will take place at Florida National Cemetery on 20 May 2019 11:00 am. Mr. Sampson was born on May 19, 1939 in Bismarck, North Dakota to Harry Peter and Beatrice Elnora Sampson. Mr. Sampson graduated from The Naval Postgraduate School with an under graduate degree in Engineering Sciences and earned his Master’s degree from The Naval Postgraduate School in Computer Systems Management. He retired from the US Navy after 20 years achieving the rank of Commander. “Dirty Harry” served as a fighter pilot during Vietnam and earned the Navy’s Distinguished Flying Cross, a military decoration awarded to those who distinguish themselves in support of operations by "heroism or extraordinary achievement while participating in an aerial flight”. After retiring from the Navy, Mr. Sampson worked as a Project Manager for the Space Shuttle Astronaut training program and also worked in the Defense Simulator Industry and as a Financial Consultant. Mr. Sampson was a life member of the Military Officers Association of America (MOAA). He enjoyed flying, fishing, country music, playing golf and cards, and spending time with his family. Harry was predeceased by his parents, two daughters; Samantha Kabel and Marlana Sampson, brother Roger Sampson and sister Bonnie Lusk. He is survived by his loving wife of 57 years Sue Sampson of Hernando, three sons: Robert Sampson of Santa Rosa, CA, Harry (JoAnn) Sampson, Leesburg, FL and Dr. Eric (Cynthia) Sampson, of Hernando, FL, brother Rick (Sheila) Sampson of Inverness, FL, two sisters; Darlene (Gregory) Hembree of Rio Vista, CA, and Beverly Sampson of Beaverton, OR, and eight grandchildren; Christina Al-Tal, Roberta Morales , Ronnica Wells, Brandon Baumann, Beau Baumann, Chris Wanitshka, Ryan Wanitshka and Trisha (Jeremy) Jones as well as seven great grandchildren. Memorial donations may be made to the Wounded Warriors Project or to a Veterans organization of your choice.

A Service of Remembrance for Harry Burnell Sampson, Sr. age 79, of Hernando, FL will be held 11:00 am Saturday, April 27, 2019 at the Inverness Chapel of Hooper Funeral Homes & Crematory. The family will receive friends from 10:00 am until 11:00... View Obituary & Service Information

The family of CDR Harry Burnell Sampson Sr. created this Life Tributes page to make it easy to share your memories.

A Service of Remembrance for Harry Burnell Sampson, Sr. age 79,...

Send flowers to the Sampson family.