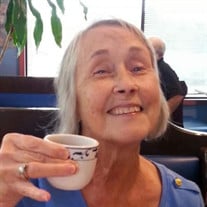 Hilda Marie Blevins Guntsch passed away peacefully on October 18, 2021, surrounded by her three girls. Her beautiful soul flew out into the cool fall morning, leaving earthly suffering behind. She was preceded in death by her parents, David and Effie Blevins, and her beloved brother LJ Blevins. In 2006 she mourned the loss of her high school sweetheart, husband of 40 years, and absolute love of her life, Rodney Guntsch. She leaves behind her three daughters: Ginger (Robby) Washburn, Tammy (Alex) Dasher, and Anne (John) Myers. Robby Washburn was the son she never had, and he held a special place in her heart as he cared so lovingly for her after the death of her husband. She treasured her 13 grandchildren. She was Grammy to Kyle, Little Robby, Adam, Andrew, Kadin, Destiny, Jessi James, Raelei, Nevaeh, Declan, and William. She was Ganga to Landon and Jillian. The oldest girl of seven siblings, she also leaves her brothers, Carl and Vernon Blevins, and her sisters, Charlotte, Darlene, and Brenda. She was a loving aunt to many nieces and nephews. Hilda was born in Ashland, Kentucky, in 1948. She moved with her family to Oak Harbor, Ohio, when she was two years old, but always remained proud of her “hillbilly” roots. She was a hard worker from early on, starting as a waitress at the tender age of 13. Over the years she worked as a waitress, bartender, and even on firewatch patrol at a nuclear power plant-but she found her truest calling as Miss Hilda, spending nearly two decades as a preschool teacher. She was loved by her students and their parents as she taught many children in Citrus County at Precious Cargo and All About Kids Preschool. She was widely known for her strong work ethic, passionate commitment to her students, and creative lesson plans. The little ones entrusted to her care, especially her own daughters and grandchildren, share memories of being rocked to sleep by the sound of her lovely singing voice. Hilda was a true role model to all she met. She taught by example-starting her own Brownie troop to allow a little girl with special needs to participate, staging elaborate graduation events for her preschoolers, and hosting a week-long summer camp for her grandchildren. In addition, she was an accomplished cook, earning the nickname “Chili Hilda” by her husband’s Harley-riding friends, who always showed up to eat her chili after a ride on their bikes. She was also widely known for her stuffed cabbages, potato salad, and lasagna; her biscuits and gravy tasted like home. She always made more than enough for everyone, and everyone was always welcome. She shared enthusiastically in the passions of her husband, from cooking over a fire outside the pop-up camper to hanging onto him from the back of his Harley. She was a football fan; no one yelled “Go Bucks!” quite as loud as she did. Music moved her; she was always singing and dancing. Hilda will be deeply missed by her three daughters, who will remember her at a private ceremony in accordance with their mother’s specific wishes. In lieu of flowers, please consider honoring Hilda with a donation to VITAS Community Connection hospice services, which brought so much comfort to her and her family (vitascommunityconnection.org) during her final weeks. Those who knew and loved her can also honor her memory by leaving an extravagant tip for their next waitress-as a former waitress who once struggled to make ends meet, Hilda delighted in being able to give generously whenever she was able. We love you, Mom. Thank you for your love, selflessness, patience, and strength. Thank you for the warm homemade applesauce on cold Ohio mornings, and thank you for the smores around the campfire on fall Florida nights. Thank you for the songs, the smiles, and the sweetness. We couldn’t have asked for a better mother. We hope to make you proud in all we do.

Hilda Marie Blevins Guntsch passed away peacefully on October 18, 2021, surrounded by her three girls. Her beautiful soul flew out into the cool fall morning, leaving earthly suffering behind. She was preceded in death by her parents, David... View Obituary & Service Information

The family of Mrs. Hilda Marie Blevins Guntsch created this Life Tributes page to make it easy to share your memories.