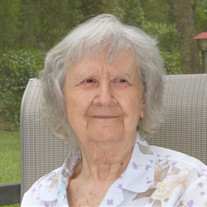 Irene Theresa (Warczyglowa) Betts, died peacefully on August 17, 2018, at her home in Homosassa, FL. She was born March 25, 1928 in Reading, Pennsylvania, to Mary (Warczyglowa) Kubacki. She and her family moved to Cleveland, Ohio in the late 1930's. Irene met Frederick Milton Betts, of Wolcott, New York, and they married on January 3, 1953. Fred was an enlisted man in the United States Coast Guard and retired from the service as a Lithographer Chief in 1968. Fred and Irene lived very briefly in Washington, D.C. before moving to Mystic, Connecticut in 1953. Besides raising a family of five children, Irene helped Fred run the Betts Printing Company and the Sea-Mist Haven (a restaurant), in Mystic, until they retired to Homosassa, Florida in 1980. During their retirement, Fred and Irene traveled to China and Hawaii. They also made many road trips within the United States and Canada. She and Fred loved going to flea markets and auctions. Irene was preceded in death by her beloved husband, Fred, on August 21, 2012, in Homosassa. She is survived by a son, Michael Terry Betts of Homosassa, Florida; a daughter, Karen (Betts) Potrebenko of Rycroft, Alberta, Canada; a son, Jon Frederick Betts of Homosassa, Florida; a son, James Paul Betts of Hudson, FL; a daughter Mary Ellen (Betts) Morgan of Old Lyme, Connecticut, a granddaughter, Diahann Patricia Potrebenko of Rycroft, Alberta, Canada; a great-grandson, Alexander Frederick Hunt of Rycroft, Alberta, Canada; a daughter-in-law, Deborah (Bergdorf) Betts of Homosassa, Florida; and a sister, Sylvia Wrentmore, of Apopka, Florida Fred and Irene will be interred at Arlington National Cemetery sometime next year. The Ceremony will be private. In lieu of flowers, if friends so desire, donations can be made in Irene's Memory to the Fisher Center for Alzheimer's Research Foundation, 110 East 42nd Street, 16th Floor, New York, NY 10017, or at alzinfo.org. Online condolences may be sent to the family at www.HooperFuneralHome.com. Arrangements by the Homosassa Chapel of Hooper Funeral Homes & Crematory.

Irene Theresa (Warczyglowa) Betts, died peacefully on August 17, 2018, at her home in Homosassa, FL. She was born March 25, 1928 in Reading, Pennsylvania, to Mary (Warczyglowa) Kubacki. She and her family moved to Cleveland, Ohio in the late... View Obituary & Service Information

The family of Mrs. Irene T. Betts created this Life Tributes page to make it easy to share your memories.

Send flowers to the Betts family.