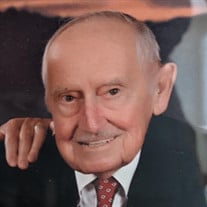 James L. Finnen, 87 years old, passed away Saturday, September 25, 2021 at Citrus Memorial Hospital. James was born in Lynn, Massachusetts to James Ernest Finnen and Elsie Delvina Marie Veilleux and was the last surviving brother of his seven siblings: Raymond L. Finnen, Ralph G. Finnen, Everett A. Finnen, Jacqueline Finnen, Claire A. Finnen and Ann M. Finnen. He served in the U.S. Navy as a boiler technician during the Korean War. After leaving the Navy, he pursued a career in aviation with an airplane and powerplant license. He worked for the leasing wing of Pan American Airways and met his wife Laila Jensen in Tehran, Iran. Laila and Jim were married 53 years and Laila preceded him in death on September 5, 2021. The family moved all over the world and lived in Iran, Austria, Belgium, Jordan, Zaire, and Turkey before settling down in 1982 in Hernando. During his life, James served in the U.S. Navy, and worked at Pan Am, Southern Air Transport, and the FAA as an air-worthiness inspector. He was passionate about family, travel, and woodworking. James leaves to cherish his memory his sons Scott and Eric, their wives Michelle and April, and his grandchildren Savannah, Haley, Lillian, and Ean. The Service of Remembrance for Mr. James L. Finnen will be held at 9:00 AM, Friday, October 1, 2021 at the Florida National Cemetery in Bushnell, Florida.

The family of Mr. James L. Finnen created this Life Tributes page to make it easy to share your memories.

Send flowers to the Finnen family.