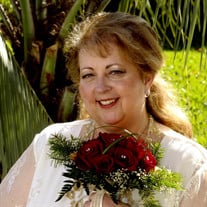 The Service of Remembrance for Mrs. Joanne O'Sullivan Oliveira, age 64, of Beverly Hills, Florida, will be held 4:00 PM, Sunday, June 10, 2018 at the Beverly Hills Chapel of Hooper Funeral Homes with Father Greg Andrews officiating. The family will receive friends from 3:00 PM until 4:00 PM, Sunday at the funeral home. She was born February 5, 1954 in Boston, MA, daughter of the late Joseph and Anne (Flannery) O'Sullivan. She died June 5, 2018 in Inverness, FL. Mrs. Oliveira earned her PhD in Nursing at Boston College. She worked as a research scientist at the Children's Hospital, Boston, MA and later as a professor at Curry College, Milton MA and at Rasmussen College, Ocala, FL. She moved to Beverly Hills, Florida from Boston in 2016. She enjoyed traveling, reading and writing. Mrs. Oliveira was preceded in death by her parents. Survivors include her husband of 10 years, Vincent Oliveira of Beverly Hills, FL, brother, Brian (Vicky) O'Sullivan of FL, 3 sisters, Maureen (Wayne Hopkins) O'Sullivan of Quincy, MA, Debra O'Sullivan of Sarasota, FL, Linda O'Sullivan of Beverly Hills, FL, 3 nephews, Eric O'Sullivan, Patrick O'Sullivan, Sean O'Sullivan, a niece, Olivia Donley, and her cat, Nudge. She was stepmother to Vincent (Pam) Oliveira Jr., Deanna (Don) Colby, and Darcy (Trevor) Chambers, and a loving grandmother to all of the grandchildren. Online condolences may be sent to the family at www.HooperFuneralHome.com. Arrangements are under the direction of the Beverly Hills Chapel of Hooper Funeral Homes & Crematory.

The family of Mrs. Joanne O'Sullivan Oliveira created this Life Tributes page to make it easy to share your memories.

The Service of Remembrance for Mrs. Joanne O&#39;Sullivan Oliveira,...

Send flowers to the Oliveira family.