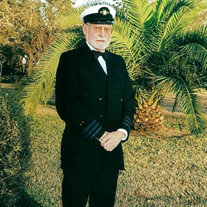 John Anthony (Captain Jack) Flynn, Jr. 89 years old Lecanto, FL John Anthony (Jack) Flynn passed away peacefully in his sleep on December 31, 2021, after a long struggle with heart and lung disease and a broken hip early in December. Jack lived a long and full life and had a love of boating and the great outdoors that he shared with his children and grandchildren. Born in New York, NY, after a successful career in the budding computer industry with IBM and other companies that took him from New York to New England, Jack and Doris, his wife of 66 years retired to Lecanto, Florida in 2001. Jack filled his retirement with fishing, boating and sharing his passion for the sea by teaching boating safety and celestial navigation through the Crystal River Power Squadron where he served as a treasurer, lead trainer and senior navigator. Jack also volunteered for 15 years as a boat captain in the Homosassa Springs Wildlife State Park, where he would transport tourists via the inland waterways. Jack was a man of strong faith and gave of himself to St. Anne’s Episcopal Church, Crystal River, serving as acolyte with other many lay roles. An active volunteer with Our Father’s Table and Meals on Wheels, he got joy in helping others by serving his community. Jack leaves behind his wife Doris, his children Peter (Cynthia) Flynn, Patricia (Knute) Syvrud and Meg (Tom) Goodale; his grandchildren Jonathon (Sarah) and Thomas Flynn and Tor and Amy Syvrud. He was predeceased by his younger brothers Richard and Thomas and talked a lot about his brothers later in life. A service in will be held at St. Anne’s Episcopal Church, 9870 W. Fort Island Trail, Crystal River, Florida on January 12th at 2:00pm. Refreshments will be served following the service in the parish hall. A memorial service will be held later in the year with interment of Jack’s ashes in Hollis, NH. In lieu of flowers, please make a contribution to the St. Anne’s Episcopal Church, Crystal River, FL in Jack’s honor. https://tithe.ly/give_new/www/#/tithely/give-one-time/1396302

The family of Mr. John Anthony (Jack) Flynn created this Life Tributes page to make it easy to share your memories.

Send flowers to the Flynn family.