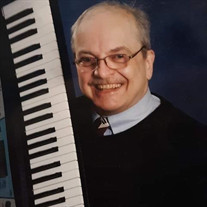 Keith Alan Petzold, age 65, was called home to the Lord on June 1, 2020 at home in Inverness, Florida. He Succumbed to advanced esophageal cancer. He was born February 12, 1955 in Plymouth, Indiana to the Late Rev. Milton and Ardell (Sessler) Petzold, alongside his identical twin Kent. He is survived by older brothers Paul (Ellen Omeara) Petzold, Albuquerque NM, Dennis Frewsburg, NY, and Kent, Inverness, Fl. Also surviving is favorite nephew Adam Petzold, Phoenix, AZ. and great - nephew Gavin Petzold, Rochester, NY, one aunt Alice Stoll, Elkhart Lake, WI and many,many cousins Also surviving are his soul - Mate, Renee Hein _ hannay, Appleton, and Pamela and Noelle McSorely, Seymour, WI. Also Special Family sisters, Laurie Freier, Kimberly, and Debbie and Katie Johnson, Appleton, will, will be missing Keith along with the entire Vern Debruin Family, mostly the Fox Valley area. Keith attended various grade schools, middle schools and high schools in Monroe and Medford WI, graduating from Medford HS in 1973. He the attended UW-Wisconsin Centers in Medford and Rice Lake, WI, achieving an Associate of arts and music degree in 1976. In Junior and Senior high school and college he excelled in wrestling, tennis, band and theater getting letters or high recognition in everything he did. He worked as a salesman and manager at several Jim Laabs Music stores throughout Wisconsin, at American Furniture and appliance, in Madison, WI before spending the next 2 decades as employee, manager and leather and felt craftsman for the Sacred Feather fine Hats and Leather Goods store on State Street, Madison, where Keith became a well-known character and fixture. He later moved to Appleton, WI as an actor, restaurant manger at a large downtown hotel, and in food service and social services for a large senior living community. After Becoming paraplegic in 2002, from a surgical procedure repairing a massive aortic dissection, he volunteered at Easter Seals, and as a musician in several nursing homes in the areas well as leading Bible studies. He was a staff musician at St. John United Church Of Christ for over 20 years, as a paraplegic, playing for church services and giving private lessons on keyboards and all brass instruments. There will be a Memorial service for Keith in Appleton, WI sometime in the future. His wish that Memorial gifts be directed to the loving congregation of St. John UCC in Appleton, Wisconsin

Keith Alan Petzold, age 65, was called home to the Lord on June 1, 2020 at home in Inverness, Florida. He Succumbed to advanced esophageal cancer. He was born February 12, 1955 in Plymouth, Indiana to the Late Rev. Milton and Ardell (Sessler)... View Obituary & Service Information

The family of Mr Keith Alan Petzold created this Life Tributes page to make it easy to share your memories.

Keith Alan Petzold, age 65, was called home to the Lord on June...

Send flowers to the Petzold family.