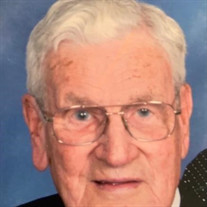 The Service of Remembrance for Mr. Kendall R. Tompkins, age 95 years, of Beverly Hills, will be held 11:00 AM Wednesday, June 26, 2019 at the Beverly Hills Chapel of Hooper Funeral Homes. Friends may call from 10:00 AM until the time of service Wednesday at the Chapel. He was born March 3, 1924 in Everett, MA, Son of Russell and Mildred Tompkins. He died June 22, 2019 in Beverly Hills, FL after a brief illness. Ken spent the first seven years of his life in Hillsdale and Rivervale, New Jersey before moving to Billerica, MA where he attended school. He joined the Merchant Marines, serving in the Pacific during WWII. He left the Merchant Marines in 1946, was employed in the construction business and married Virginia Kenison of Everett, MA in 1948. Ken left the construction business in 1959 and was hired by Brandeis University where, over a 30+ year career, he rose to become the supervisor of laboratory and medical supplies for both the college and the research labs. In 1989 Ken retired and he and Ginny moved to Beverly Hills, FL where Ken had the chance to more fully enjoy his hobbies: bowling in two leagues, carrying a 147 average in May, 2019; painting lawn figurines, writing poetry and singing in church choirs. For 46 years, Ken was well-known in many congregations for his voice and his remarkable memory for lyrics. He was a member of the First Church of God in Inverness, FL where he sang a solo as recently as earlier this year. In addition to Ken's hobbies, he belonged to the Egypt Temple Shrine of Tampa, FL, the Citrus Shrine Club of Floral City, FL and the Masonic Lodge #398 of Floral City, FL. He was preceded in death by his parents, Russell and Mildred Tompkins, his wife Virginia (Ginny) Tompkins and his long-time companion Dorothy Wilmot. Ken is survived by his daughter Karel Ranniko (Roy) and granddaughter Randi Ranniko, his sister Marge Brenzell (Glenn) and their children Holly Sweet, Darryl Brenzell, Heather Stary and Kendra Dalley, as well as Deborah Stollery and Jennifer Farrant. In lieu of flowers, please make a donation to the Shriner's Hospital for Children in Ken's memory. He spent many happy hours raising money to see that children may be cared for without financial worries.

The Service of Remembrance for Mr. Kendall R. Tompkins, age 95 years, of Beverly Hills, will be held 11:00 AM Wednesday, June 26, 2019 at the Beverly Hills Chapel of Hooper Funeral Homes. Friends may call from 10:00 AM until the time of service... View Obituary & Service Information

The family of Mr. Kendall R. Tompkins created this Life Tributes page to make it easy to share your memories.

The Service of Remembrance for Mr. Kendall R. Tompkins, age 95...

Send flowers to the Tompkins family.