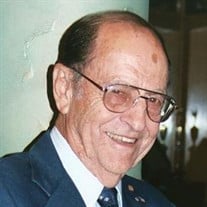 Mr. Kenneth Webb, of Hernando, Florida, passed away Saturday, May 6, 2017, in Hernando, FL. He was born December 15, 1924, in Stewartstown, PA, son of  Walter and Irene (Gordon) Webb. Ken worked as an Area Manager for Farrens Tree Surgeons in Mobile, AL until he retired back to Hernando where the Webb's have been since 1938.  Kenneth was preceded in death by his parents and his loving wife Patricia. Survivors include 3 daughters: Sharon L. (Steve) Hollingsworth of Kennesaw, GA, Kim Webb of Winter Haven, FL and Sandra Day of Jacksonville, FL, 2 grandchildren: Aja Webb-Sears and Skylar Day. The family would like to express to all who knew Ken to join them in Celebrating the Reuniting of Ken and Pat Webb his loving wife of over 62 years. Ken at 92 1/2 years old snuck out as quiet as if he were hunting deer in the woods. No homemade grits and sausage that morning as he often did... must have been the excitement of seeing Pat again. Ken was a WWII Veteran serving in the Army Air Corps in the Pacific Theater who worked on Mitchell B25 Bombers. He later worked for Farrens Tree Surgeons for over 44 years retiring as an Area Manager.   Ken Webb is known near and far for his Fish Fry and Barbecue expertise. Thousands have enjoyed his specialties including the Alabama State Troopers, VFW Post 49, Pi Kappa Phi Fraternity, Mobile Gun Club, Abba Temple Shriners, American Legion, Alabama Deep Sea Fishing Rodeos, Blessing of the Fleets in Bayou La Batre , countless politicians, Cattlemen’s Association, and much more. Ken and Pat Webb were active in Mobile for 25 years supporting the the Schools, PTA, Honorable Staff Members under multiple Alabama Governors, etc.  As he made a living working on trees and living off the land often finding himself in the woods the family invites you to plant a tree in celebration of his life and Native American heritage so that Ken's memory will live on for generations to come. The family will hold a private Celebration of Life at a later date. Online condolences may be made to the family at www.hooperfuneralhome.com. Arrangements are under the direction of Inverness Chapel of Hooper Funeral Home & Crematory.

Mr. Kenneth Webb, of Hernando, Florida, passed away Saturday, May 6, 2017, in Hernando, FL. He was born December 15, 1924, in Stewartstown, PA, son of  Walter and Irene (Gordon) Webb. Ken worked as an Area Manager for Farrens Tree Surgeons in... View Obituary & Service Information

The family of Mr. Kenneth Webb created this Life Tributes page to make it easy to share your memories.

Send flowers to the Webb family.