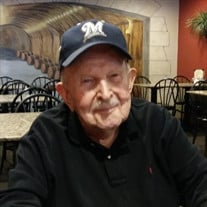 Mr. Laurie A. Partanen, age 100 of Crystal River, Florida, died Tuesday, May 25, 2021. Laurie was born May 22, 1921 in Florence, WI, son of Charles and Selma (Kransi) Partanen. He worked as a Tool and Die Maker for Briggs and Stratton Corporation,... View Obituary & Service Information

The family of Mr. Laurie A. Partanen created this Life Tributes page to make it easy to share your memories.

Send flowers to the Partanen family.