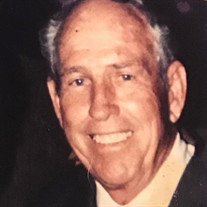 The Service of Remembrance for Mr. Lawrence Madison Carter , age 91, of Hernando, Florida, will be held 4:00 PM, Tuesday, February 26, 2019 at the Beverly Hills Chapel of Hooper Funeral Homes with Pastor J. D. Hatfield officiating. The family will receive friends from 2:00 PM until 4:00 PM. Online condolences may be sent to the family at www.HooperFuneralHome.com. He was born November 7, 1927 in Deland, son of Wardie Carter and Mildred Louge. He died February 21, 2019 in Lecanto, FL. Mr. Carter was a Navy veteran serving during the Korean War. He worked as a Handyman for On Top of the World and enjoyed tinkering with things and photography. Mr. Carter was preceded in death by his beloved wife, Mary Lou Carter, his parents and son, Glen Perry. Survivors include son, Wendel Lamar (Brookelyn) Bradley of High Point, NC; daughter-in-law, Charity Perry of Hernando, FL; daughter-in-law, Angela Perry; grandchildren, Jonathan Bradley, Corey Perry, and David (Melissa) Perry; and great-grandchildren, Brookelyn, Kannon, and Sydney. Arrangements are under the direction of the Hooper Funeral Homes & Crematory.

The family of Mr. Lawrence Madison Carter created this Life Tributes page to make it easy to share your memories.

The Service of Remembrance for Mr. Lawrence Madison Carter ,...

Send flowers to the Carter family.