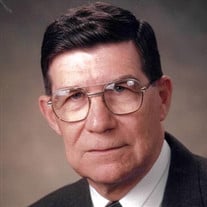 Mr. Lloyd William Jenkins, age 91, of Homosassa, FL, was welcomed into the arms of the Lord on July 1st with his family by his side. He was born February 25, 1927 in Huntington, WV, son of A.C. and Callie Jenkins. Lloyd graduated from Raceland High School and the University of Kentucky. He was a diehard Wildcat fan until the end. He served in the Army Air Corp and after serving: he was employed for 38 years with Union Carbide (Martin Marietta) in Paducah, KY as an Electrical Engineer. All who knew Lloyd, were aware that family meant the world to him. He enjoyed spending time with his family. This was followed closely by his love of a big pot of beans, fried bologna, onion, and corn bread. His homemade ice cream was loved by all as well. He was a Kentucky Colonel and was a member of two engineering fraternities, Eta Kappa Nu and Tau Beta Pi. Lloyd enjoyed golf, fishing, and was a man of deep faith and served his church throughout his whole life. Lloyd was preceded in death by his parents, sisters, Ree Jenkins and Elsie Cumpton and one nephew. He is survived by his wife of 68 years, Francis Wells Jenkins, son, Barry (Nicki) Jenkins of Homosassa, FL, 3 daughters, Janette (Ron) Morrison of Eatonton, GA, Bryna (John) Johnson of Brooksville, FL, and Teresa Jenkins of Homosassa, FL, 7 grandchildren, 8 great grandchildren and 1 great great grandchild. A Service of Remembrance will be held 12:00 PM Thursday, July 5, 2018 at the Homosassa Chapel of Hooper Funeral Homes. The family will receive friends from 11:00AM until time of the service at the chapel. A private family service and burial will take place at Florida National Cemetery in Bushnell, FL. Online condolences may be sent to the family at www.HooperFuneralHome.com. Expressions of sympathy can be sent to St. Jude in Memphis, TN at www.stjude.org or the Path of Citrus County, 21 S. Melbourne St, Beverly Hills, FL 34465. Arrangements are under the direction of the Homosassa Chapel of Hooper Funeral Homes & Crematory.

Mr. Lloyd William Jenkins, age 91, of Homosassa, FL, was welcomed into the arms of the Lord on July 1st with his family by his side. He was born February 25, 1927 in Huntington, WV, son of A.C. and Callie Jenkins. Lloyd graduated from Raceland... View Obituary & Service Information

The family of Mr. Lloyd W. Jenkins created this Life Tributes page to make it easy to share your memories.

Send flowers to the Jenkins family.