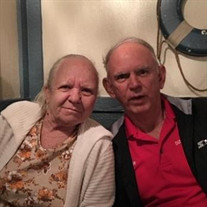 Loved ones of Lonnie and Bonnie Daughtery are remembering the loving couple for their devotion to each other and to their family. Lonnie “Junior” F. Daughtery, Jr. passed at the age of 72 on Sunday, December 23, 2018. Preceded in death just a few months prior by his beautiful wife of nearly 48 years, Bonnie (Smith) Daughtery at the age of 69 on Thursday, July 5, 2018. Both lost long, hard-fought battles with cancer; but are now in peace together again to share their love for eternity. Lonnie was born December 10, 1946, in Nashville, Georgia, a son of the late Lonnie F. Daughtery, Sr. and Mary (Smith) Daughtery. He was preceded in death by three brothers Frank, A.W. and Donald. He is survived by two brothers Howard and Buck, and his sister Margaret. Lonnie will be fondly remembered by family and friends as a loving father and grandfather, proud patriot and US Navy veteran, avid gardener, hobby cattle farmer and business owner. He is also known for his famous waffles that were our family holiday tradition. Lonnie served onboard nuclear submarines during the Vietnam war. After 14 years of service, he moved with his wife and children to Vicksburg, Mississippi to begin a new career at a nearby nuclear power station. He later finally realized his dream of owning a farm and began operating a small family cattle farm. He loved giving the children and grandchildren rides on the tractor. After retiring to Inverness, Florida in 2009, he learned that retirement was not for him. So he started a new chapter in his life as a successful owner of a boat motor repair business. Lonnie’s true love, Bonnie, was born July 26, 1948 in Calusa, California, a daughter of the late William “Billy” Smith and Doris (Blankenship) Smith. She was preceded in death by her sister Charlette and is survived by two brothers David “Sonny” Smith and Bobby Smith. Bonnie will be fondly remembered as a loving mother and grandmother, a devoted wife to her best friend, and a dedicated homemaker putting the needs of her family above that of her own. She enjoyed sewing, painting, embroidering, quilting, crocheting and gardening. She was creative and crafty, leaving behind homemade heirlooms to be cherished for generations. She also had a tougher side as she would help her husband on the farm, driving the tractor, caring for the cattle and baling hay. Bonnie was always there to help her family with whatever they needed. Even if it meant leaving her home for months to help with the needs of her grown children and grandchildren. She was generous with her love and time. Lonnie and Bonnie are survived by four children Jean Daughtery, Ronda (Chris) Farris, Chris Daughtery and Kenneth “Kenny” Daughtery. They were preceded in death by their daughter Nancy “Katie” (Daughtery) Floyd. They are survived by five grandchildren Julia, Jake, Braydon, Alexis and Madelyn. They also loved two others as their grandchildren Ryleigh and Tyler. Lonnie and Bonnie are further survived by nieces, nephews, other relatives and friends. The couple met in September of 1970 and married just three short weeks later on October 7, 1970. Their love was instant and lasting. Having been married for nearly 48 years, they were an inspiration and a wonderful example of life and love. And now that love continues on in eternity. This loving couple will be remembered with friends and family in a memorial service on Saturday, January 19, 2019. Visitation is from 1:00 to 2:00 at Hoopers Funeral Home, 501 W. Main Street, Inverness, Florida, followed by the funeral service at 2:00.

Loved ones of Lonnie and Bonnie Daughtery are remembering the loving couple for their devotion to each other and to their family. Lonnie &#8220;Junior&#8221; F. Daughtery, Jr. passed at the age of 72 on Sunday, December 23, 2018. Preceded in... View Obituary & Service Information

The family of Lonnie & Bonnie Daughtery created this Life Tributes page to make it easy to share your memories.

Loved ones of Lonnie and Bonnie Daughtery are remembering the...

Send flowers to the Daughtery family.