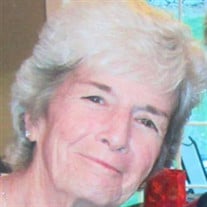 On April 13th, 2020, our beautiful mother, Marie Mahoney entered into her new life, into the sight of God, and into the arms of our father, Daniel. Marie Patrice Kennedy was born on November 4th, 1939 to Thomas Kennedy and Anne Claffey Kennedy, and was raised in New York City with her brothers Joseph and Thomas, and her sisters Elizabeth and Lynn. Marie married the love of her life, Daniel Mahoney, on May 13th, 1961, and thus began a love story for the ages. Marie and Dan began to grow their family at first in New York City, and later moved with their 5 children to Cornwall, NY. Marie's love for her family and her children was so big, that it spilled over into everyone else's children as well. Marie began babysitting her beloved first grandchildren, and then a few other children, which then morphed into a nearly 15 year career in daycare. Many children have been thoroughly loved by Marie, and many parents have been thoroughly grateful. After Dan's retirement, Marie and Dan moved to their beautiful mountain home in the "Irish Alps" in upstate New York. Having an empty nest for the first time led Marie to follow a long-held dream and she pursued becoming an LPN in 1995. Her affinity for the elderly drew her to geriatrics, where her natural warmth and abilities as a caregiver brought comfort to so many. Marie and Dan eventually built a home in Florida and entered into some joyous years of being "snow birds" where they could be social and have fun all year round. Our mother, it has been said, "never met a stranger", so growing their circle of friends came naturally as they enjoyed their lives in Oak Hill, NY and at Arbor Lakes in Hernando, Florida. Serving others continued to drive Marie, and she was involved in many charitable endeavors and social events where she could help, whether it was in her community or with her church, or sponsoring an impoverished child, contributing to the many charities she supported, or fostering shelter animals. Marie always had animals by her side....and loved each and every one of them whether it was her beloved dog, her many cats through the years, or the family pets which included hamsters, fish, birds, and even a pet duck. Marie loved them all. If there was a baby, a child or a four-legged creature within 100 yards of Mom, she couldn't resist saying hello! She spoiled those she loved, (just ask the grandkids!) shopped like nobody's business, made the best cheesecake on earth, and believed that a hug could make any problem better. Mom and Dad were the first to arrive at every family event, and always the last to leave, side by side in everything. Throughout her life, Marie had an unwavering faith in God. Always involved in her church, Marie was a eucharistic minister for many years, and sang in her church choir. Her walk with the Lord and her capacity to love and to forgive was an inspiration to her family, friends, and strangers alike. Her faith carried her through the most challenging parts of life, including her diagnosis of Alzheimer's disease. Our parents' devotion to one another and to their faith was an honor to behold. As her disease progressed, and stole from her so many abilities, what it never could do was touch her spirit. Our Mother may have forgotten how to form words, but she never forgot how to smile at you with an Irish smile that lit up her entire being and yours. She may have forgotten how to walk, but she knew how to put her arms around you if you were near enough (and fortunate enough) to be wrapped up in one of her hugs. She could no longer lift a spoon, but she'd bring your hand to her lips to place a kiss on it. She may have forgotten nearly everything, but what remained was her sweet soul, sprinkled with just the right amount of moxie and humor. It was nothing short of a miracle that the "Mom" in her remained when nearly all else fell away. Our mother still knew us, still laughed, still lit up a room with her soul. If she remembered nothing else, she remembered love. And in her 80 years on this earth, she still never met a stranger. We are overjoyed in the knowledge that Mom is now made whole, that she is back with her beloved husband, our Dad, we are eternally thankful that she was ours. Some people only dream of angels.....we got to be raised by them. Marie is predeceased by her husband of 56 years, Daniel Mahoney, her sister Elizabeth Meldrum, and her brother Joseph Kennedy. Left to cherish her memory are her 5 children: Elizabeth Masse and her husband Raymond of Norfolk, MA; Daniel Mahoney and his wife Andrea of Cornwall-on-Hudson, NY: Chris Mahoney of Poughkeepsie, NY; Anne Mahoney and her husband Eric Rodriguez of Newburgh, NY; and Andrew Mahoney of Newburgh, NY. She is also survived by her eight grandchildren, who she adored.....Jen (Ryan) Bernard, Carol Anne Mahoney, Julia, Joseph and John Masse, Aidan and Elizabeth Mahoney, and Amelia Grace Rodriguez; her brother Thomas (Jeanne) Kennedy of Seneca, SC. and her sister Lynn (Rich) Cavaliero of Highlands Ranch, CO. Marie's family would like to thank the staff at Citrus Health and Rehabilitation in Inverness Florida, for the care and love given to Marie, and also to her personal caregivers....Kristina Dannels, Pam Gillingham, Linda Pettyjohn and Linda Flock, whose devotion to our mother is simply more evidence of God's hand on our family. Marie's children would also like to request that if you wish to honor Marie, please call your Mom today. And if you can't call, then find a moment to say a prayer of thanks to her. Our mother would love nothing more. Due to current events, services will be held at a later date. Memorial contributions may be made in Marie's name to the Alzheimer's Association.

On April 13th, 2020, our beautiful mother, Marie Mahoney entered into her new life, into the sight of God, and into the arms of our father, Daniel. Marie Patrice Kennedy was born on November 4th, 1939 to Thomas Kennedy and Anne Claffey Kennedy,... View Obituary & Service Information

The family of Mrs. Marie P. Mahoney created this Life Tributes page to make it easy to share your memories.

Send flowers to the Mahoney family.