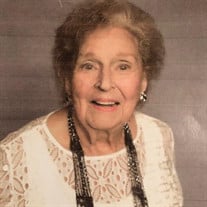 Marilyn Marie Shultice Booth of Inverness, FL passed away peacefully at home in her sleep on Monday October 7, 2019. She lived a long life of 88 years. Marilyn was born in Des Moines, Iowa. Her parentage was unusual in that her mother was a real city girl and her father was a real country boy. Much of Marilyn's youth was spent on the family farm, one which had been homesteaded long ago by her paternal grandmother's family, who were early pioneers in the Altoona area. Not liking household chores, she was more interested in working outside on the farm. She was the oldest and only survivor of 4 siblings. Brothers Gene and Joe, Issaquah WA and sister Beverly, Woodstock, IL. She attended Altoona grade school, and then went to a one room country school through 8th grade, walking long distances in all kinds of weather including the snow Iowa is famous for. In high school, her mother became critically ill and she assumed most chores for her three younger siblings. After completing high school at age 16, she was fortunate to attend Simpson College majoring in Fine Arts and music. Her membership in Alpha Chi Omega social sorority has been a life long pleasure for her. While attending Simpson, she met her future husband, Hollis R. Booth, who went on to obtain his B.S. Degree from Simpson. He also obtained his Pharmacy degree from Drake University. Marilyn continued to study voice and journalism. At one time she was a board member of the “Iowa Industrial Editors” group. Long time Florida residents, they moved to St. Petersburg in 1964 and moved to Inverness in 1998. During their life together three children were born; Timothy, Rebecca and Hilary. There are 5 grandchildren; Anne, Andrew, Jacob, Connor and Meghan. and one great grandchild; William Hollis. Marilyn was an Aunt to 7, a Great Aunt to 13 and a Great, Great Aunt to 5 nieces and nephews. Marilyn was always involved in volunteering with the public schools, she was on the board of the St. Petersburg YWCA. She was a founding member of the Citrus county chapter of NAMI (National Alliance on Mental Illness) where she compiled the monthly newsletter. She also wrote a monthly column for the local newspaper, the Citrus County Chronicle. She was still involved in Real Estate dealings. Her career spanned over 30 years in Pinellas and Citrus counties, and she was active in the Chamber of Commerce. Her joy was when she was a soloist with First Methodist Church choir in St. Petersburg and with First Presbyterian Church in Inverness. Her fervent hope always was that the world would somehow be a better place for her having lived in it. If you were to speak with anyone in her community, they would tell you it was a better place. Donations can be made to NAMI, P.O. Box 832, Inverness, FL, 34451-0832 Memorial service to be held Saturday, November 2nd at 10:00am at First Presbyterian Church, 206 Washington Avenue, Inverness, FL.

Marilyn Marie Shultice Booth of Inverness, FL passed away peacefully at home in her sleep on Monday October 7, 2019. She lived a long life of 88 years. Marilyn was born in Des Moines, Iowa. Her parentage was unusual in that her mother was... View Obituary & Service Information

The family of Mrs Marilyn Marie Booth created this Life Tributes page to make it easy to share your memories.

Send flowers to the Booth family.