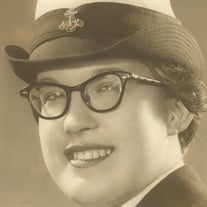 Marion Emily McNiece, proud veteran, active feminist and loving strong willed independent woman, passed away March 10th, 2021 in Beverly Hills, Florida. She was 86 years old. Graveside services will be held at 10:30 a.m. Wednesday, March 17, at the Florida National Cemetery, 6502 S.W. 102nd Avenue Bushnell, FL 33513. Marion was born on September 16, 1934 in Trenton, NJ, to Elizabeth Rosina Wolcott and Court Ferdinand Hutchinson. After graduating high school, Marion enlisted in the United States Navy during the Korean Conflict, where she dedicated 5 years before getting married and having children. Nicknamed "Dutchess," she left the military as a Navy Yeoman 2nd Class (YN2), working in the Naval Intelligence Services prior to discharge. She had five children and fervently returned to the job market . After holding successful jobs with the Westerly, RI Chamber of Commerce, the Heart Association and the Cancer Society, she turned her focus back to her education, proudly earning a Bachelor's degree in Liberal Arts at age 42 from the University of Connecticut in 1977. She continued until her retirement to work at Seaside Regional Center in Waterford, CT where she had many colleagues, friendships and fond memories. As a single mother, Marion supported and raised her children independently in a time of spirited feminism while also dedicating hours of time towards volunteer work and helping those in need. She founded and was elected President of the New London CT, Clamshell Quilt Guild, where women quilted and collaborated on philanthropy efforts that raised thousands of dollars to deserving charities. Marion was a beloved advocate for women in history and in the military. She actively immersed herself in the advancement of women's rights and educated others on how they can help the cause as well. Marion was an immensely creative and generous individual. As anyone who knew her could attest, her home was always welcome to all. She enjoyed her retirement reading, designing her impeccably charming home, and spending time with family and friends. She always kept a positive outlook on life and encouraged others to do so also. She is preceded in death by daughter Adrienne Leigh Haney, son Garth P. McNiece, her grandson Sebastian Nikolai Abt, her parents, her brother Donald Hutchinson, and sisters Jane Temple and Dorothy Puntorno. Marion leaves behind her loving daughter Lynne Courtney Abt and her husband Bill, son Adam Perry McNiece and his wife Tina Collins, and daughter Meredith Lesley Kilpatrick. Also among those who will miss Marion are her many grandchildren Matt Haney and his wife Kristen, Bryan Haney, Ursula Abt, Bernadette Abt and her husband Brandon Benzenhafer and Veronica Abt, Zachary, Zane, Zander and Zarek McNiece, Graham and Hayden Kilpatrick, and great-grandchildren Oliver, Orin and Lola, as well as many other extended family and friends. She also leaves behind her good friends and neighbors Mike and Kathy who helped her to remain living independently as she strongly wished. In lieu of flowers, memorial contributions can be made to The Women In Military Service For America Memorial Foundation, 200 North Glebe Rd. Suite 400, Arlington, VA 22203. Donations can be made via this link: . Online condolences may be made to family at www.hooperfuneralhome.com. Arrangements are the under the direction of Hooper Funeral Homes & Crematory

The family of Ms. Marion Emily McNiece created this Life Tributes page to make it easy to share your memories.

Send flowers to the McNiece family.