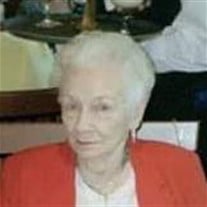 Lecanto - Mary Lucille (Lendvay) Buckius, 89, entered God’s presence on March 2, 2018. She was born in Cleveland, Ohio on March 5, 1928 to Erma (nee: Hvizdos) and Steve Lendvay. She was a devoted wife to her husband of 60 years, Charles W. Buckius, who predeceased her. A loving mother of eight children, she is survived by: Robert (Julie); William (Priscilla); Bonnie Bradley (Dan); Edward Bruce; Barbara Krogh (Allen); Brenda Neff; Brian (Sandy); and Charles, Jr., and a caring grandmother to nineteen grandchildren, twenty-two great-grandchildren, one great-great grandchild, and several nieces and nephews. She is also survived by her brother, John Lendvay (Donna) of Orlando, Florida, and predeceased by her brothers, Herbert and Richard Lendvay (Doris). Mary and her husband, Charles (Bud), became residents of Lecanto, Florida, in 1991, after raising their family in Madison, Ohio, for more than thirty-five years. Mary retired from Citrus Hills in 2004, where she was Manager of the Sales Department for more than ten years. For many years she was involved in the Lecanto Chapter of TOPS (Take Off Pounds Sensibly), serving as Leader for several years, as well as Secretary. Mary exemplified her love for life, family, friends, and neighbors. Her faith, love, and grace were demonstrated in all she did as a wife, mother, grandparent, and friend. A Service of Remembrance will be held at 11:00 AM, Wednesday, March 7, 2018 at Grace Bible Church, Homosassa Florida. The Family will receive friends from 6:00 PM - 8:00 PM, Tuesday, at the Homosassa Chapel of Hooper Funeral Homes. Online condolences may be sent to the family at www.HooperFuneralHome.com. Arrangements are under the direction of the Homosassa Chapel of Hooper Funeral Homes & Crematory.

The family of Mrs. Mary Lucille Buckius created this Life Tributes page to make it easy to share your memories.

Send flowers to the Buckius family.