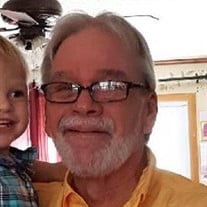 A Celebration of Life for Mr. Michael Allen Powers Sr., age 61, of Citrus Springs, Florida, will be held 2:30 PM, Saturday, August 25, 2018 at the Homosassa Chapel of Hooper Funeral Homes. The family will receive friends one hour prior to the service. He was born April 4, 1957 in Marietta, GA, son of Raymond and Marilyn (Freeman) Powers. He died August 20, 2018 in Crystal River, FL. Mr. Powers worked as a consultant for the federal government and also worked at Riverland Bait Shop in Dunnellon, FL which is owned by his brother-in-law. He was a fisherman. who enjoyed gardening and organics. Michael was an avid Dolphins fan and he loved NASCAR. His love of his family was unmatched. Mr. Powers served as a Scout Master. He was a GA Sprout, Flo Grown, Mate, Dad, Gran Dad, Being the Change, Organic, Green, Natural and Mom Earth Helper. He never met a stranger. Mr. Powers was preceded in death by father, Raymond F. Powers, Jr., a brother, Patrick Powers, and a sister, Laura Powers. Survivors include his mother, Marilyn J. Powers, wife, Phyllis Powers of Citrus Springs, FL, son, Michael Allen Powers, Jr. of Citrus Springs, FL, 3 daughters, Trisha Powers-Wallace of Tampa, FL, Joella Powers of Tampa, FL, and Heather Powers-Luna of Citrus Springs, FL, 2 brothers, Christopher Powers of St. Petersburg, FL, and Timothy Powers of Homestead, FL, 3 sisters, Beth Powers-Laney of Tampa, FL, Joan Powers-Huff of Zephyrhills, FL, and Dawn Powers-Clifton of Derby, KS, 3 grandchildren, Sadè Wallace, Mekhi Wallace and R.J. Luna, and many, many, many, many, many nieces and nephews, and great nieces and great nephews. The family requests expressions of sympathy take the form of donations in Michael's memory to a Green Minded Charity. Online condolences may be sent to the family at www.HooperFuneralHome.com. Arrangements are under the direction of the Homosassa Chapel of Hooper Funeral Homes & Crematory.

A Celebration of Life for Mr. Michael Allen Powers Sr., age 61, of Citrus Springs, Florida, will be held 2:30 PM, Saturday, August 25, 2018 at the Homosassa Chapel of Hooper Funeral Homes. The family will receive friends one hour prior to the... View Obituary & Service Information

The family of Mr. Michael A. Powers created this Life Tributes page to make it easy to share your memories.

Send flowers to the Powers family.