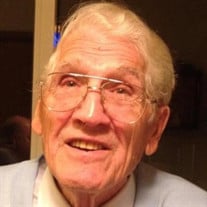 Milliard “Bud” Elden Wetzel, a man of God, was welcomed into Heaven on October 16, 2020, from HPH Hospice in Lecanto, FL with loving family at his side. Bud and his twin sister Mildred were born on November 1, 1921, to Charles and Nellie (McCraken) Wetzel. Milliard grew up in Clearfield, Pennsylvania, where he graduated from Clearfield High School in 1938. After graduating from Edinboro State College in 1942, he was called by our Saviour to full-time ministry. He served Baptist Churches in PA and NJ for 42 years. He also received a BS in Education from Trenton State College. While teaching for 15+ years, Bud always felt that the Lord opened opportunities for him to serve in the community and reach other others for his Lord and Saviour. Bud fell in love with Pauline Parker at first sight, the preacher's daughter. They were married by Pauline’s father on December 18, 1940. Pauline was a supportive wife and fellow worker for Christ throughout their ministry. They were married for 77 years, and Bud was a devoted husband and father of four children. He enjoyed singing with his family - especially hymns, playing guitar, storytelling, carpentry, and sharing his faith. Bud felt privileged to baptize each of his children. As young adults, he oﬃciated at their weddings and was proud of their faithfulness to their spouses. Bud was preceded in death by his parents, four brothers, three sisters, one granddaughter Sally, his wife Pauline, and daughter Kathleen Dodge. He will be greatly missed by his children: Pauletta (Clyde) Canfield; Son-in-law Larry Dodge; Marsha (Henry) Kott; Millard (Leslie) Wetzel, Jr. His grandchildren: Clyde (Cathryn) Canfield, Jr; Pauletta (John) McKibben; Karileen Dodge; Larry (Maggie) Dodge, Jr; Lee (Rebekah) Dodge; Kareen (Steven) Buri; Kathleen (Jesse) Cudd; Kristaleen (Jonathon) Carter; Stephen (Danielle) Kott; Stephanie (Ethan) Mindrebo; Stacie (Benjamin) Prol; Seth (Krystal) Kott; Millard (Dawn) Wetzel III; Jody (Joshua) Propst; and Kaitlyn Wetzel; 46 Great Grandchildren, and 10 Great-Great Grandchildren. We know the Lord is saying, “Well done good and faithful servant!” The Service of Remembrance for Rev. Wetzel will be held on Friday October 23, 2020 at 1:00 p. m. at the Inverness Chapel of Hooper Funeral Homes & Crematory with Pastor Stephen Kott will presiding. Interment will follow at Hills of Rest Cemetery in Floral City Florida. Friends are welcome to call on the family at the funeral home from 4:00 – 6:00 p. m. on Thursday afternoon.

Milliard &#8220;Bud&#8221; Elden Wetzel, a man of God, was welcomed into Heaven on October 16, 2020, from HPH Hospice in Lecanto, FL with loving family at his side. Bud and his twin sister Mildred were born on November 1, 1921, to Charles and... View Obituary & Service Information

The family of Rev. Millard "Bud" Elden Wetzel created this Life Tributes page to make it easy to share your memories.

Milliard “Bud” Elden Wetzel, a man of God, was welcomed into...

Send flowers to the Wetzel family.