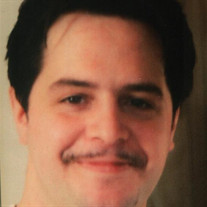 Mr. Preston Alan Bilotti, age 48, of Inverness, Florida, died Tuesday July 18, 2017 in Inverness, FL. He was born December 13, 1968 in Brooklyn, NY, son of Albert and Norita (Hynes) Bilotti. Preston and his wife Kristen moved from New Jersey to Florida in 2006 to take care of family. Preston worked many years in both the auto industry and international trade. Most recently, he was a shift manager for Pizza Hut, Inverness from 2010-2016. Preston was a gifted musician and songwriter, and in the process of designing a video game. His other interests included politics, blogging, and history. Preston was a loving and committed husband, known for his intellect and sense of humor. A "Golden Rule" person, Mr.Bilotti was often referred to as an "Uncle" or "Father" figure by many of the young people he worked with. Preston was a strong animal rights advocate. He rescued, adopted and TNR'ed, a countless number of cats and other animals too. Survivors include his wife of 17 years, Kristen Bilotti, of Inverness, FL, parents, Albert and Norita Bilotti of Toms River, NJ. A brother Glenn, his wife Kelly, and two nieces, Jade and Dara, and other brother Wayne, all from NJ. In lieu of flowers, please donate to Alley Cat Allies at www.alleycat.org. Services are August 8, 2017 at 11:00 AM, at Cornerstone Baptist Church, Inverness, FL, lunch to follow. Online condolences may be sent to the family at www.HooperFuneralHome.com. . Arrangements by the Inverness Chapel of Hooper Funeral Homes & Crematory.

The family of Mr. Preston Bilotti created this Life Tributes page to make it easy to share your memories.

Send flowers to the Bilotti family.