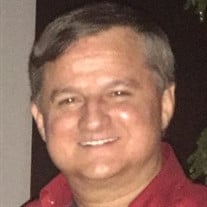 Richard Norman Adams (Ricky Adams), age 60, died peacefully in his sleep of natural causes in his Tampa, Florida, home on Thursday, March 11, 2021. A true Floridian, Ricky was born on April 25, 1960 in Miami, Florida. Ricky Adams was known as the “wittiest” student in his 1978 Citrus High School’s graduating class. This title would come to describe him even in his later years. Ricky was exuberant, talented, gifted, witty, and funny. He was a caretaker, singer, painter, and artist at heart; a great cook and photographer. He enjoyed entertaining friends with meals, laughter, and humor. He will be missed by many. Ricky Adams was the second eldest son of the late Leonard Norman Adams, who died 17 months prior. Ricky is survived by his long-time friend, Dino Buccarelli, siblings James Adams and Tammy Adams, step-mother Linda Adams, half-brothers Jaret Adams and Bart Adams, nieces and nephews, great nieces and nephews, and many others who loved and appreciated him. A private Celebration of Life will be scheduled for a later date but we hope you join in on your own personal celebration of our friend and brother, Ricky Adams.

The family of Richard Norman Adams created this Life Tributes page to make it easy to share your memories.

Send flowers to the Adams family.