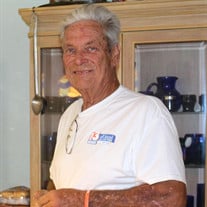 Richard Charles Sherouse, 76, passed away peacefully on April 23, 2022. Richard was born January 30, 1946 in Miami, FL to Charles and Ruth Sherouse. After graduating from North Miami High School in 1964, he started his apprenticeship in the sheet metal industry. Richard became a journeyman sheet metal worker and was a member of Sheet Metal Workers Local 32 Union. He retired after over 30 years in the industry. On June 19, 1982 he married Gayle, the love of his life for 40 years. In 1991, the couple moved to Citrus County where Richard was an avid flea market vendor. He sat up under the tree at Stokes Flea Market for over 20 years and was known as "The Toolman". Richard is preceded in death by his parents. Surviving relatives include, his loving wife Gayle, three children, Richard Jr. (Rachel), Dara, and Kacie, two sisters, Annette Powers (David), and Marie Grimsley (Tom), one brother, Gerald Sherouse (JoAnn), three grandchildren, Richard II, Austin, and Hailee, and numerous nieces, nephews, and friends. Cremation will take place at Hooper Funeral Home. Respecting Richard's wishes, a funeral service will not be held. Instead, a Celebration of Life will take place in Daytona Beach where he loved driving on the beach. Also at a later date, some of Richard's ashes will be spread over Lake Okeechobee where he loved to spend time fishing as a young man. In lieu of flowers, please make donations in Richard's name to The Alzheimer's Foundation.

Richard Charles Sherouse, 76, passed away peacefully on April 23, 2022. Richard was born January 30, 1946 in Miami, FL to Charles and Ruth Sherouse. After graduating from North Miami High School in 1964, he started his apprenticeship in the... View Obituary & Service Information

The family of Mr. Richard Charles Sherouse created this Life Tributes page to make it easy to share your memories.

Send flowers to the Sherouse family.