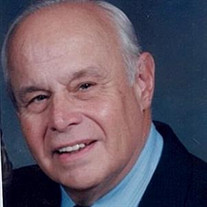 The Service of Remembrance for Mr. Robert W. "Bob" Bruce, age 94, of Beverly Hills, Florida, will be held 10:00 AM, Tuesday, December 14, 2021 at the St. Anne's Episcopal Church, Crystal River, FL with Rev. Richard Chandler officiating. Interment will follow at Florida National Cemetery, Bushnell, Florida. The family will receive friends from 3:00 PM until 5:00 PM, Monday, December 13, 2021 at the Beverly Hills Chapel of Hooper Funeral Homes. In lieu of flowers, please make a donation in Bob's name to a charity of your choice. Online condolences may be sent to the family at www.HooperFuneralHome.com. Bob peacefully passed away at his home under the loving care of his family. He was born July 14, 1927 in Portsmouth, NH, to Bessie C. and Frederick E. Bruce, but due to his mother's illness was soon taken to Bangor, ME and raised by his Great Grand Parents Anna and Walter Delehunt until their passing in 1944. At age 16 he was under the Guardianship of Elizabeth and Merle Bailey of Bangor. He attended Bangor Public Schools and graduated from Bangor High on June 15, 1945 and joined the Navy on July 5, 1945. During his four year enlistment Bob served on all seven continents, including Antarctica; Operation Highjump 1946-47. On August 9, 1948 he married his loving wife of 64 years Gloria E. Bailey. After the service he and his wife Gloria attended Michigan State College under the GI Bill. While there they had two children, Robert W. and Elizabeth L. and later Douglas A. on Long Island. Graduating June 7, 1953 with degrees in Public Administration and Political Science he attended the university of Maine as a Graduate Assistant in the History and Government Department. In September 1954, Bob was employed by Chase National Bank, New York City. He and his family relocated to Levittown, Long Island, NY., they lived there for 36 years until his retirement in October 1989. Mostly Bob was a Municipal Bonds Analyst with Standard & Poors Corp. In May of 1990 he and Gloria moved to Beverly Hills, FL. A cradle Episcopalian, he served Parish and Diocesan positions at St. Johns, Bangor, St Francis of Assisi, Levittown and St. Anne's, Crystal River. He was active in Boy Scouts, a 55 plus year Mason, and enjoyed Stamp collecting, traveling and Golf. He followed both the Red Sox and the Patriots. In Citrus county he was the President of the Genealogical Society, Chairman of the Beverly Hills Chorus, member of the Beverly Hills Recreation Association and Civic Association. Bob was also a member of VFW Post 10087, American Legion, and New York, Maine and New England Clubs. Bob was preceded in death by his wife, Gloria who died May 4, 2013. He is survived by his children Robert Jr. and his wife Patricia of Vienna, VA, Elizabeth and her husband Stephen of Beverly Hills, FL, and Douglas A. of East Meadow, NY, and three grandchildren Lauren & husband Greg, Amanda and husband Bennett, and Jennifer and her husband Paul. Arrangements are under the direction of the Hooper Funeral Homes & Crematory.

The family of Mr. Robert W. "Bob" Bruce created this Life Tributes page to make it easy to share your memories.

Send flowers to the Bruce family.