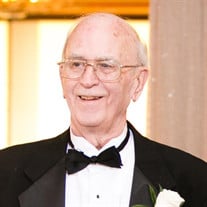 A Funeral Mass for Mr. Robert S. Furlow, age 83, of Hernando, Florida, will be held at 11:00 AM, Saturday, February 19, 2022 at St. John the Evangelist Roman Catholic Church, located at 44 Bridge Street in Lambertville, NJ. Friends may call and pay respects from 10:30 – 11:00 AM. Interment will follow at Holy Cross Cemetery in Yeadon, PA. Robert (Bob) was born November 1, 1938 in Philadelphia, PA, son of Samuel and Lillian (Smith) Furlow. He passed from this earth peacefully in his home in Hernando, FL on January 10, 2022 to reunite with his beloved wife Carol Ann (Borowski) Furlow in Heaven. Bob married Carol on July 14, 1962 and together they were devoted and loving parents to their children, Barbara and James (Jim), and proud grandparents to Jack (18), Hana (11), and Shayna (9). Bob went to West Philadelphia Catholic High School for Boys and met his wife at a Church dance. After graduating from Villanova University and enlisting in the United States Army, Robert served as a proud and dedicated employee of RCA (later General Electric) for the entirety of his career, retiring as Director of Financial Operations in 1999. Upon retirement, Bob and Carol moved from Yardley, Pennsylvania to Hernando, Florida, sharing 57 years of marriage and 20 years in retirement before Carol’s passing in 2020. Throughout their marriage, Bob and Carol cherished time together taking cruises, traveling, playing scrabble and golf, and dancing as a couple. Bob deeply enjoyed playing chess and poker (with friends), Pinochle (partnered with Barbara and squaring off against Carol and Jack), war/board games (with Jim), Charades and other party games (with joyful gatherings of friends and family), and countless thousands of games of scrabble in his ultimate loving rivalry with Carol throughout their marriage. Bob loved sports, and was an avid golfer and devoted fan of his Villanova Wildcats and the Philadelphia Phillies, and found joy in sharing these pastimes with Carol and his brother Wayne Furlow. Their home was always filled with music; Bob played guitar and sang (often songs from his favorite artist Elvis Presley) and took great joy in seeing his children and grandchildren carry on his love of music and playing instruments. Bob loved to be surrounded by his family, and so enjoyed time with his brother Wayne, Sister Pat and his nieces and nephews. At his wish, Bob spent his final years quietly and joyfully reflecting on his beautiful life in his cherished home overlooking the Skyview Golf Course in Tera Vista, enjoying visits from his children, grandchildren, family and friends, sharing home movies of his favorite family memories, and supported by the love and compassion of his wonderful caregivers. Bob will be remembered as an incredible loving and devoted husband and father, who always put family first. He was easygoing, kind, and had a great sense of humor. Through his words and actions, Bob showed those close to him to love, to face life’s challenges with dignity and a healthy sense of humor, and to plan and be mindful in our daily lives in order to appreciate and indulge in the special and wonderous experiences. He will ever be a hero to his children, serving as a role model and mentor for Jim as a father, and forever remaining in Barbara’s heart as “daddy’s little girl”. Mr. Furlow was preceded in death by his wife Carol, his parents, his brother Wayne, and sister Patricia Callahan. Those family dearest to his heart, who mourn his passing while celebrating his life include son James R. Furlow and his wife Cheryl of St. Augustine, FL, daughter, Barbara Carol Durning-McHenry and her husband David of Washington Crossing, PA, sister in laws Marie (David) Sorber of Wilmington, DE and Staci McVeigh of Homossasa, FL, and his grandchildren Jack Durning and Hana and Shayna Furlow. The family requests expressions of sympathy take the form of memorial donations in Robert’s honor to Lung Cancer of America at https://lcfamerica.org/about/. Please list Robert Furlow’s name under “tribute donation name”.

The family of Mr. Robert S. Furlow created this Life Tributes page to make it easy to share your memories.

Send flowers to the Furlow family.