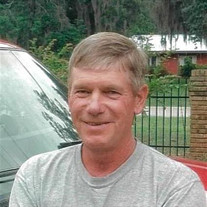 The Service of Remembrance for Mr. Stephen C. Stuart, age 68 years, of Inverness, will be held 11:00 AM Thursday, August 15, 2019 at the Apostolic Church of Jesus Christ, 10340 W. Pennsylvania St, Homosassa. Interment will follow at Florida National Cemetery, Bushnell with full military honors. Friends may call from 10:00 am until the time of service Thursday at the church. Online condolences may be left for the family at www.HooperFuneralHome.com. Arrangements under the direction of the Inverness Chapel of Hooper Funeral Homes. Mr. Stuart was born December 30, 1950 in Indianapolis, Indiana to Ralph and Martha (Phelps) Stuart. He was the owner of Stuart’s Masonry; a member of the Apostolic Church of Jesus Christ; and a US Army Veteran of Vietnam where he received an Army Commendation Medal with Oak Leaf Cluster and a Bronze Star. He was preceded in death by his father and a grandson: Caleb Hestand. Surviving are his wife of 45 years: Glenda Heck Stuart; a son: Dewey (Teresa) Stuart, Inverness; his mother: Martha Greene, Inverness; 2 Brothers: Danny (Peggy) Stuart, Inverness; Gary (Pam) Stuart, North Carolina; foster daughter: Robin (Brandon) Gelinas; 9 Grandchildren: Clinton (Amy) Hestand, Sean (Patty) Stuart, Michael Stuart, Nikki (Jason) Brown, Amy Jobe, Nathan (Cara) Futch, Robert Futch, Gavin Gelinas, Mason Gelinas, and David Hestand; and 11 Great Grandchildren: Hayden, Jameson and Lincoln Hestand, Kaylea, Caleb, Taylor and Skylar Brown, Jaylynn and Colton Jobe, Kevin Hogan, and Aria Futch. Bro. Steve Stuart was an awesome man of God, he shined a light everywhere he went. Before he passed he was working on the building fund for the roof of his church. He donated money as much as possible. His goal was to have a new roof on the church. His wish was for everyone to donate in his name instead of buying flowers for his funeral. We are making this page to give everyone a chance to give if they are able. Thanks and God Bless. https://www.gofundme.com/in-memory-of-steven-stuart

The Service of Remembrance for Mr. Stephen C. Stuart, age 68 years, of Inverness, will be held 11:00 AM Thursday, August 15, 2019 at the Apostolic Church of Jesus Christ, 10340 W. Pennsylvania St, Homosassa. Interment will follow at Florida... View Obituary & Service Information

The family of Mr. Stephen Cecil Stuart created this Life Tributes page to make it easy to share your memories.

The Service of Remembrance for Mr. Stephen C. Stuart, age 68...

Send flowers to the Stuart family.