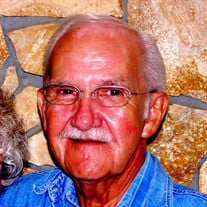 The Service of Remembrance for Mr. Theodore "Ted" A. Swanson, age 83, of Inverness, Florida, will be held 2:00 PM, Monday, January 22, 2018 at the First Baptist Church of Inverness with Dr. Byron Brown officiating. Interment will follow at Oak Ridge Cemetery. The family will receive friends from 12:00 PM until 2:00 PM, Monday at the Church. Ted was born March 28, 1934 in Kewanee, IL, son of Oliver and Lutishia (Sizemore) Swanson and died January 16, 2018 in Lecanto, FL. Ted was an Air Force veteran who served during the Korean conflict. Ted was married to Rose Mary Teaburg on May 30, 1958. Ted and Rosemary were married for 45 years, until her death in 2003. He worked as an Electrician in Illinois until his retirement in 2002. Ted and Rose moved to Inverness, Florida from Kewanee, IL in 2002. Mr. Swanson was a member of the First Baptist Church of Inverness. His family stated that Ted was a hard working man, whose main focus was providing for his family. For the last 13 years, Ted shared a very special bond with his beloved companion Ruth Gleason. They loved to travel, share picnics on the beach, watch movies together and most of all spend time with their families, together. Mr. Swanson is proceeded in death by his parents, his infant sister Elva May, his wife Rose Mary Swanson. Survivors include son, Steve (Shelly) Swanson of Vinton, IA, daughter, Sheri (Dale) DeShane of Inverness, FL, Tammy (Fred) Fleming, 8 grandchildren, Beth (Paul) Calhoun, Jenna (Shawn) Parmater, Ryan (Renee) Swanson, Eric Swanson, John Ptasnik, McKenzie Fleming, Madisen Fleming, MacKenna Fleming, 3 great grandchildren, Tobey Calhoun, Bryce Calhoun, Connor Parmater and his friend and companion Ruth Gleason. Arrangements are under the direction of the Hooper Funeral Homes & Crematory, Inverness FL. Online condolences may be sent to the family at www.HooperFuneralHome.com.

The Service of Remembrance for Mr. Theodore "Ted" A. Swanson, age 83, of Inverness, Florida, will be held 2:00 PM, Monday, January 22, 2018 at the First Baptist Church of Inverness with Dr. Byron Brown officiating. Interment will follow at... View Obituary & Service Information

The family of Mr. Theodore A. Swanson created this Life Tributes page to make it easy to share your memories.

The Service of Remembrance for Mr. Theodore &quot;Ted&quot; A. Swanson,...

Send flowers to the Swanson family.