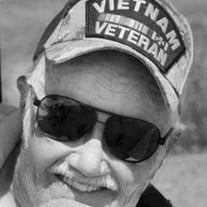 Timothy Michael McCullough, was born on August 6, 1946, in Kansas City, Kansas; he died at the age of 73, on April 11, 2020, at Citrus Memorial Hospital in Inverness, FL from cancer therapy complications. Tim was preceded in death by his parents, Mary Viola McCullough Klinkerman and George Henry McCullough, sister Mary Ruth Clark Mora, sister Martha Elizabeth Green Cox, and nephew Michael Clark. Tim is survived by his sister Esther Klay and her husband Johnnie Klay; nieces Theresa Clark, Cheryl Clark, Lori Bellew (Jason), Jeanne Clark, Lesa Shelman, Elizabeth Dysart (Cary), Judith Green, Susan Hutton, Emily Green, Patricia Cox, Amanda Knote (Korey), Cathy Klay; nephews David Clark, Mark Green, Jesse Cox, Edward Aten (Shoshana Ungerleider) ; John J Klay (Amy) and many great nieces and nephews and great-great nieces and nephews. Tim graduated from Shawnee Mission West High School, Overland Park, Kansas, in 1965. He earned an Associate of Arts degree from Johnson County Community College, Overland Park, Kansas in 1975. Tim served in the U.S. Army achieving the rank of Specialist Fifth Class. He worked on helicopter avionics in Vietnam during his two tours which totaled 21 months. He began his photography career while in Vietnam.Tim was married to Linda Cherri McBrerety in 1970 and divorced in 1973. Tim was married to Linda Burt in 1980 and divorced in 1999.Tim worked for Bendix Corporation, Rooney Trucking, the U.S. Postal Service, Continental Trailways Bus Company, and Ken Pratt Trucking. Tim founded TeeMack Photography. TeeMack is where his passion for anything with wheels fused with his photography and computer skills, and developed into stunning art. He traveled to multiple car shows in the Midwest making friends and photographing their vehicles. He was honored to be a contributing photographer at the Art of the Car Concours at the Nelson-Atkins Museum of Art in Kansas City, MO. Tim said: "If it has wheels, I'm going to photograph it." The following statement was sent to Tim from Pat, one of his buddies from Vietnam: Tim, you're an artist and an historian. One of the things that you do is to record, visually/pictorially, the incredible cavalcade of automobile history. The colors and modifications, along with the underlying preservation of decades-old cars, is a wonderful thing to see. Truly, only the human imagination limits what so many folks have done with their "rides." To see Tim’s art visit https://www.teemack.org/ Tim lived most of his life in Johnson County, Kansas. He left the cold winters behind and moved to Inverness, Florida, to be near his sister Esther Klay in 2018. Tim’s remains will be interred at the Florida National Cemetery in Bushnell, Florida under the care of Hooper Funeral Home in Inverness Florida www.HooperFuneralHome.com. A virtual service is being planned.Memorials may be made to Lions Club International or Mission in Citrus (https://www.missionincitrus.com/).

Timothy Michael McCullough, was born on August 6, 1946, in Kansas City, Kansas; he died at the age of 73, on April 11, 2020, at Citrus Memorial Hospital in Inverness, FL from cancer therapy complications. Tim was preceded in death by his parents,... View Obituary & Service Information

The family of Mr. Timothy Michael McCullough created this Life Tributes page to make it easy to share your memories.

Send flowers to the McCullough family.