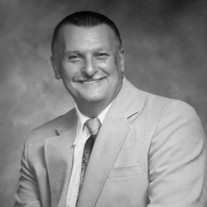 Walter Carl Maidhof, 94, of Inverness, Florida formerly of Lehigh Acres, FL passed away quietly in his sleep on February 17 in his home he shared with his wife, Helen. Walter was preceded in death by his father Karl, his mother Anna, his son Gary and his grandson Ian Maidhof. He is survived by his wife Helen,their daughter Kristine, daughter-in-law Charlotte, his brother Norman, brother-in-law George - along with 3 grandchildren, Anthony Perez, Aaron(Alex)Maidhof and Jesse Jones, 2 step-grandchildren Stephanee(Tariq)Smikker, and Ryan Stoner. He also has 5 great-grandchildren and several nieces, nephews and great nieces and nephews. Walter was born in Bronx, New York in 1927. He was a Veteran of the U.S. Army Air Force. He was part of the New York City Police Department for 21 years. Throughout his career in the NYPD Walter was in an elite special assignments task force guarding Presidents such as Kennedy & Nixon, vice president Spiro Agnew, Foreign Heads of State and Astronauts Neil Armstrong, Buzz Aldrin and Michael Collins, just to name a few. After he retired from the NYPD in 1973 he then moved to Lehigh Acres, FL where he lived happily for 30 years. He was an active member of Faith Lutheran Church, Lehigh Acres Moose Lodge #2266 (former president) and the American Legion Post #323. He loved to bowl and loved watching football, he was a friend to everyone. During those 30 years in Lehigh Acres, Walter was well known around town. He was the security guard at First Charter Bank starting in July 1975, now known as Sun Bank. On his second day on the job he had to make a split decision and stopped a bank robbery that made him a hometown hero. This was after over 20 yrs of service with NYPD and never having actually use his weapon. He received a commendation from the sheriff’s department and several citizen awards from the Lehigh Corporation. He moved to Inverness, FL in 2005 to be closer to his son, Gary. Walter was a member of Good Shepard Lutheran Church in Hernando and the Inverness Moose Lodge #2122. The visitation is at 2pm and funeral service at 3pm on Saturday, 2/27 at Hooper’s Funeral Home located at 501 W Main St, Inverness, Florida 34450. Their website is www.HooperFuneralHomes.com. The family wishes any memorial contributions be made to Harry Chapin Food Bank or The American Heart Association.

Walter Carl Maidhof, 94, of Inverness, Florida formerly of Lehigh Acres, FL passed away quietly in his sleep on February 17 in his home he shared with his wife, Helen. Walter was preceded in death by his father Karl, his mother Anna, his son... View Obituary & Service Information

The family of Mr. Walter Carl Maidhof created this Life Tributes page to make it easy to share your memories.

Send flowers to the Maidhof family.